By clicking on the blue portal below, you can download a PDF of the March 24 edition of the San Bernardino County Sentinel

San Bernardino County in the last year experienced a marginal drop in the number of homeless individuals and families living within its expansive borders, according to the official census of the displaced carried out annually.
The tallying of the San Bernardino County’s destitute, referred to as the “point in time count” was carried out on January 26 of this year.
According to that accounting, the number of the dispossessed living on the streets, in parks, beneath railroad trestles, under freeway and roadway bridges, in riverbeds, alleyways and other places unsheltered dropped by one percent of the displaced population a year before.
The results of this January’s point in time count were presented March 22 to officials with the San Bernardino County Interagency Council on Homelessness.
The reduction in the county’s itinerant between January 2016 and January 2017 was minuscule compared to the 12% decrease registered between January 2015 and January 2016. Still, officials were able to find a silver lining in the statistics.
“While communities across Southern California are seeing increases,” said San Bernardino County Fifth District Supervisor Josie Gonzales, “we’ve stabilized our numbers here.”
According to the 2017 count, 1,866 homeless people were documented as being in the county on January 26, 2017 as compared to 1,887 on January 28, 2016, a reduction of 21 people or a 1 percent downward trend.
The survey cataloged 1,179 of those homeless as “unsheltered.” Within the unsheltered category, there was a reduction of 13 during the year from 1,191 in 2016.
Of the homeless population, 73 percent are adult males.
The survey found 14 unaccompanied minors and 26 children in families.
The predominant ethnicity of the homeless in San Bernardino County is shown as those identified as “white,” at 67 percent. Hispanic/Latinos accounted for 24 percent.
In descending order, the cities with the highest homeless populations were: San Bernardino: 491; Redlands: 164; Victorville: 157; Upland: 127; Ontario: 91; Rialto: 91.
The federal government uses the annual point in time count to apportion federal funds intended to deal with homelessness.

My aim is not to pass laws, it’s to repeal them.—Barry Goldwater
The trouble with socialism is that eventually you run out of other people’s money.—Margaret Thatcher
A general dissolution of principles and manners will more surely overthrow the liberties of America than the whole force of the common enemy. While the people are virtuous they cannot be subdued; but when once they lose their virtue then will be ready to surrender their liberties to the first external or internal invader. — Samuel Adams
The inherent vice of capitalism is the unequal sharing of blessings; the inherent virtue of socialism is the equal sharing of miseries. — Winston Churchill
Out of every hundred new ideas ninety-nine or more will probably be inferior to the traditional responses which they propose to replace. No one man, however brilliant or well-informed, can come in one lifetime to such fullness of understanding as to safely judge and dismiss the customs or institutions of his society, for those are the wisdom of generations after centuries of experiment in the laboratory of history. — Will And Ariel Durant
“The America Republic will endure until the day Congress discovers that it can bribe the public with the public’s money.” — Alexis de Tocqueville
It is not strange… to mistake change for progress. — Millard Fillmore
I am for doing good to the poor, but I differ in opinion of the means. I think the best way of doing good to the poor, is not making them easy in poverty, but leading or driving them out of it. In my youth I travelled much, and I observed in different countries, that the more public provisions were made for the poor, the less they provided for themselves, and of course became poorer. And, on the contrary, the less was done for them, the more they did for themselves, and became richer. — Ben Franklin
Remember that a government big enough to give you everything you want is also big enough to take away everything you have. — Barry Goldwater
The prudent capitalist will never adventure his capital… if there exists a state of uncertainty as to whether the Government will repeal tomorrow what it has enacted today. — William Henry Harrison
That government is best which governs the least, because its people discipline themselves. — Thomas Jefferson 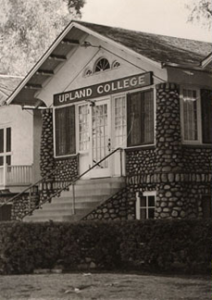 Upland College, located at the southeast corner of Arrow Highway and San Antonio Avenue in Upland, was an institution of higher learning founded by the Brethren in Christ Church as Beulah College in 1924. It was considered a West Coast satellite campus of the Brethren in Christ Church’s Messiah Bible School and Missionary Training Home in the east.
The College was shuttered in 1964.

Toxicodendron diversilobum (syn. Rhus diversiloba), commonly named Pacific poison oak or western poison oak, and known by it scientific names Toxicodendron diversilobum or Rhus diversiloba), is a woody shrub-like vine in the Anacardiaceae or sumac family inhabiting conifer and mixed broadleaf forests, woodlands, grasslands, and chaparral biomes. It is widely distributed in California. Indeed, the native inhabitants of California before the arrival of the Spanish in the 1700s referred to what is today Los Angeles as Yangna or Iyaanga, which means poison oak place.
As with other members of the Toxicodendron genus, T. diversilobum causes itching and allergic rashes in roughly four-fifths of humans who touch or brush up against it. It can have even more serious consequences in those who inhale the smoke from it when it is burned.
Toxicodendron diversilobum leaves and twigs have a surface oil, urushiol, which causes an allergic reaction in the form of contact dermatitis – an immune-mediated skin inflammation involving inflammation, colorless bumps, severe itching, and blistering. Repeated exposure ups sensitization to urushiol, which also exists in the peel of mangos.
Toxicodendron diversilobum is common in various habitats, from riversides with adequate water to areas of the foothills near the desert where rainfall is far less or barely extant. It often occurs in chaparral and woodlands, coastal sage scrub, grasslands, and oak woodlands; and Douglas-fir (Pseudotsuga menzesii), hemlock–Sitka spruce, Sequoia sempervirens (coast redwood), Pinus ponderosa (Ponderosa pine), and mixed evergreen forests.
It thrives in shady and dappled light through full and direct sunlight conditions, at elevations below 5,000 feet. The vining form can climb up large shrub and tree trunks into their canopies. Sometimes it kills the support plant by smothering or breaking it.
Poison oak is variable in both appearance growth patterns. It will grow into a foot-and-a-half to 13-foot high shrub in open sunlight, a treelike vine of up to 30 feet, and grow to more than 100 feet long with a three to eight inch trunk, or as dense thickets in shaded areas. It breeds by spreading rhizomes and by seeds.
The plant is winter deciduous, with its stems leafless after cold weather sets in, though sometimes bearing berry clusters. The leafless stems occasionally sport black dried sap marks.
The plant has three leaflets that are one-and-a-half to 4 inches long, with scalloped, toothed, or lobed edges, in some degree resembling the lobed leaves of a true oak, though more glossy. Leaves are bronze upon unfolding in February to March, bright green in the spring, yellow-green to reddish in the summer, and bright red or pink from late July to October. White flowers form in the spring. When the plant is well nourished, the flowers become greenish-white or tan berries.
Black-tailed deer, mule deer, California ground squirrels, western gray squirrels, and other indigenous fauna feed on the phosphorus, calcium, and sulfur-rich leaves. Some bird species will shelter in the plant and feed upon its berries. Domesticated animals do not appear to be sensitized to urushiol.
The plant has medicinal properties. Indigenous California Indians used the plant’s sap to cure ringworm, and applied a poultice of fresh leaves as a palliative to rattlesnake bites. An infusion of dried roots, or buds eaten in the spring, were taken by some native peoples for an immunity from the plant’s poisons. Chumash Indians used T. diversilobum sap to remove warts, corns, and calluses; to cauterize sores; and to stop bleeding. A decoction made from the roots was utilized to treat dysentery.

Jeans are in fashion and with a hint of creativity because there’s a demand for a high cuff or a step hem. The high hem can be pulled up to a height using either a loose, straight, or skinny jean and you can go as high as below the knee. No hemming needed here, just a plain over-the-top fold, throw a t-shirt on, and a pair of cute booties, or sneakers, and you’ve set in the trend. There’s a real cool feel to that look, too. The neat thing is the high cuff comes with choices you can store buy or do yourself. Whatever you decide, you won’t be visiting a seamstress this season because the attention is at the cuff. The stepped jean is another do-it-yourself piece, but you can store buy this hem, too. The stepped hem is perfect with sandals, heels, and sneakers. It’s easy to do it yourself: Just take a pair of jeans, highlight, cut shorter at possibly to ankle bone length at the front, and make the back about 1½” longer. The neat thing is the step hem looks great with flats and heels. The hem is pretty interesting and can turn out to be a flattering cut because it helps elongate the leg, and shows a dash of skin. Spring is definitely into unique hemlines, with uneven hems that create a step, and exaggerated cuffs. Have fun going all out rolling your cuffs to your calf area, or unevening your hems. Make this a fashionably unique season!

“I wish I had invented blue jeans. They have expression, modesty, sex appeal, simplicity – all I hope for in my clothes.” Yves Saint Laurent