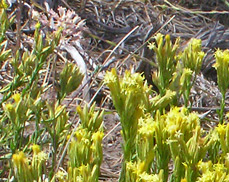 Rabbitbrush or Dwarf Chamisa is a knee high, compact shrub with pale green stems and ivory-yellow flowers in autumn. Known scientifically as chrysothamnus depressus, this plant is sometimes called the long-flowered rabbitbrush. A North American species of flowering plant in the aster tribe within the sunflower family, it is native to the southwestern United States, specifically the states of California, Arizona, New Mexico, Nevada, Utah, and Colorado. It grows in dry canyons, rocky crevices and similar habitats in the Mojave Desert, the Mohave Desert and the Colorado Plateau, among other places
As a branching shrub up to 20 inches tall, the chrysothamnus depressus produces large, dense arrays of small yellow flower heads, each with disc florets but no ray florets. It sports woody, highly branched caudices, its proximal branches decumbent, with bark that is tan to gray, and which grows flaky with age. The stems are green, becoming whitish tan, which are more or less ridged from the leaf bases, densely covered with very fine down. Leaves are erect or closely ascending, their blades with evident midnerves, linear to oblanceolate or narrowly oblong, roughly 7-to-30 millimeters by by 1.5-to-7 millimeters, flat to keeled, with acute tips, the faces without hairs or at most covered with fine soft hairs or down. The inflorescence occurs in densely boat-shaped arrays, not overtopped by distal leaves. There is a structure surrounding or supporting the head of flowers called an involucre, consisting of a group of bracts, which are also referred to as phyllaries. Phyllaries are essentially modified leaves close near a flower that are of a differing shape, size or color from other leaves. The phyllaries number from 20 to 25 in series of four to six, and are strongly vertical. They are tan with green and or purplish markings, with midnerves evident throughout them.
The small but numerous yellow flowers make the shrub attractive and conspicuous. Once the bright flowers open, the upright angularity of the plant is added to by the sharply pointed lobes of the flower petals.
Because it is a low shrub, the descriptive term “depressus,” Latin for “flattened or pressed down,” was put into its name. The plant was first noted by Thomas Nuttall in the 1830s, and he named and described it in 1848.