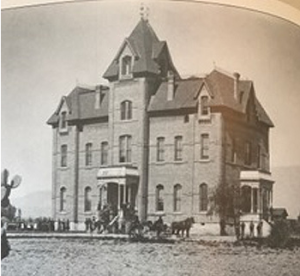 Higher education in Ontario had its roots in the city’s inception. In 1882, George Chaffey dedicated 20 acres at the corner of Fourth Street and Euclid Avenue for a college of agriculture. Under a trust agreement with the University of Southern California, provisions were made to enhance the site with more buildings. The cornerstone of Chaffey College was laid on March 17, 1883, and construction in earnest began in January 1884. The building was constructed using more than 300,000 bricks. Within its confines were a chapel, four large lecture rooms, eleven offices, a library and a museum The college opened in October 1885 with 10 students. By 1890, the courses emphasized classical studies instead of agriculture. For financial reasons, Chaffey College’s connections to the University of Southern California ended in 1901. Thus, it converted to what was called Ontario High School. 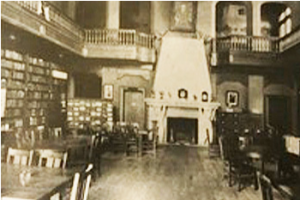 The library at Chaffey College in its early years.

The Chaffey Union High School District was created in 1911. George Chaffey provided the district with an $8,000 endowment and Ontario High School became Chaffey High. Between 1909 and 1916 the original three-story building underwent remodeling, and a separate library and auditorium were added. New construction provided science and mechanical arts classrooms, as well as administration quarters. In 1916, the Chaffey board acquiesced in having a junior college co-located on the high school campus. That year, Chaffey Junior college opened with 100 students. Chaffey High School still exists on the site. Chaffey College move to Alta Loma in 1961.