After the San Bernardino County District Attorney’s Office’s Public Integrity Unit began an investigation into Upland City Councilwoman Janice Elliott’s allegations that the city council engaged in Brown Acts violations last May, information pertaining to the Upland City Council and its members beyond what Elliott had initially provided came to light. That information pointed to a tie-in between the Brown Act violations which Elliott had highlighted in her complaint and conflict of interest allegations pertaining to councilman Sid Robinson. The Ralph M. Brown is California’s open public meeting law which requires that all official business of a governmental entity take place in public, with five exceptions – discussion relating to potential or ongoing lawsuits, real estate transactions, contract negotiations, employee discipline or firing, and employee public union collective bargaining. The City of Upland had and still has a contract with the City of Upland to provide public relations, communications, strategy formulation and crisis management services. Robinson, who ran unsuccessfully for the Upland City Council in 2016, was appointed to the council last December to fill the void on the council that was created when Debbie Stone vacated her council post to become mayor. After Robinson took his place on the council, he voted numerous times to approve payments the city made to the 20/20 Network. An outgrowth of the Brown Act violation investigation was further inquiry into the relationship between Robinson and the 20/20 Network. Investigators came across information showing that Steve Lambert, a principal in the 20/20 Network, had been present during closed door meetings by the city council in which the discussion had strayed beyond the topics permitted for such meetings, which allegedly constituted violations of the Brown Act. Subsequently, the city council voted to strip councilwoman Elliott of three of her most prestigious adjunct committee assignments, a move widely seen as retaliation for her having tattled to the district attorney’s office about the alleged Brown Act violations. Lambert assisted Mayor Debbie Stone in writing the speech she gave at the June 12 council meeting in which she justified the concerted action to remove Elliott from her committee assignments. 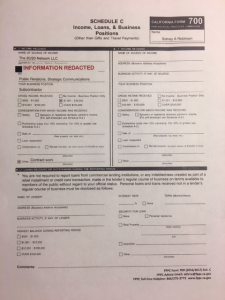 Above is Exhibit G, the schedule C page on the California Form 700 economic interest disclosure document Sid Robinson filed with the Upland city clerk last January. This shows that Robinson worked as a subcontractor with the 20/20 Network, which has a contract with the City of Upland to provide public relations, communications, strategic planning and crisis management services. District attorney’s office investigators initially looking into alleged Brown Act violations by the city council became focused on the professional and financial relationship between Robinson and the 20/20 Network because of the potential conflict of interest issues attending that circumstance. As a councilmember, Robinson on several occasions approved payments to the 20/20 Network. Robinson and Steve Lambert, a principal in the 20/20 Network, insist those payments do not comprise a conflict of interest because the city entered into the contract with the 20/20 Network before Robinson joined the council, Robinson never voted to enhance or continue the contract, Robinson ceased being a subcontractor with 20/20 before he joined the city council, and Robinson was never an owner, never previously had and does not now have any financial interest in the 20/20 Network.

Information about that investigation began to circulate by June and when word of the council’s action against Elliott reached the district attorney’s office, it prompted investigators there to make an examination of Elliott’s report of the Brown Act violations with renewed vigor. On July 21, the Sentinel published an article that reported on the investigations and the issues being focused upon. Steve Lambert, Sid Robinson and Upland City Manager Martin Thouvenell took exception to the Sentinel’s report, and in short order lodge demands for retraction with the Sentinel. Lambert, a former newspaper executive, called the Sentinel’s journalistic coverage of the investigation irresponsible, misleading, false, damaging to his company’s reputation, defamatory and libelous, characterized the presentation as “wildly speculative and conspiratorial” and further asserted the reporting upon the investigation and the background behind it was done “all without corroboration.” The gist of the article, he said, was “unsupported by facts” and was “a clear defamatory distortion of the truth.”
Lambert took further issue with the article’s description of the April 24 and May 8 closed sessions of the Upland City Council during which the Brown Act violations under investigation by the district attorney’s office occurred, stating that the article “wrongly characterizes my involvement in closed sessions as alleged violations of the Brown Act.” Thouvenell said the article contains “malicious and inaccurate statements.”
Beginning with its July 28 edition, the Sentinel has been marshaling the documents and materials upon which the research for the July 21 article was based, publishing in serial format exhibits within the district attorney’s office’s case file on the investigation into the Brown Act violation and Sid Robinson’s relationship with the 20/20 Network. Documents already published include exhibits A, B and C, the minutes to the April 24, 2017 Upland City Council meeting, the agenda for the May 8, 2017 Upland City Council meeting and a document entitled “In House Policies of the Upland City Council,” which was discussed and signed by the Upland City Council members during the closed session of the May 8 meeting, respectively. These illustrate the substance that was at the basis of the original investigation into the Brown Act violations. Last week, the Sentinel published exhibits D, E, and F, respectively, the minutes from the May 8 council meeting; the agenda for the June 12 meeting containing the agenda item to remove councilwoman Janice Elliott from three of her committee assignments; and the minutes of the June 12 meeting in which Elliott was in fact removed from those committee assignments. These further illustrate the basis upon which Elliott made the Brown Act complaint and further demonstrate the swiftness with which the remainder of the city council retaliated against her after making that complaint.
This week the Sentinel is publishing exhibit G, Sid Robinson’s statements of economic interest showing his status as a “subcontractor” with the 20/20 Network.
While examining the individual investigative file exhibits separately or in installments may provide the casual reader with insufficient context upon which to make any type of judgment, the reader should be able to orient him or herself to the germane issues by finding a copy of the July 21 Sentinel and reading the article “Robinson Denies Upland’s Contract With His Affiliate Constitutes A Conflict” and the July 21 and 28 editions of Sentinel which included Sid Robinson investigative file exhibits showing how the original Brown Act investigation evolved so that the circumstance involving councilman Sid Robinson and his relationship to the 20/20 Network came focus for the investigators.
Hereafter, the Sentinel will publish exhibits H, I and J, respectively, a narrative from Steve Lambert hailing Sid Robinson as having joined the 20/20 Network as one of its public relations professionals; the page from the minutes of the April 24 Upland City Council meeting in which Robinson was appointed by his council colleagues as the city’s representative to the Southern California Association of Governments; and a press release produced for the Southern California Association of Governments authored by Steve Lambert as part of the 20/20 Network’s contractual work for that entity.