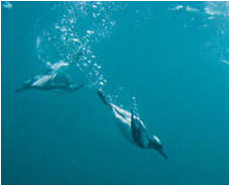 The American dipper is known by its scientific name, Cinclus mexicanus, and is also referred to, erroneously, as the water ouzel,
A stocky dark grey bird, the American dipper occasionally has a head tinged with brown, along with white feathers on its eyelids that cause the eyes to flash white as the bird blinks. It is roughly six-and-a-half inches long and weighs on average one-and-two-thirds ounces. Long-legged, it bobs its whole body up and down during pauses as it feeds on the bottom of fast-moving, rocky streams. This gives it its common name.
Inhabiting mountainous regions of Central America and western North America and Central America from Panama to Alaska, this bird like other dippers has an extra eyelid called a nictitating membrane, which allows it to see underwater, and scales that close its nostrils when submerged. Dippers are unique among passerines for their ability to dive and swim underwater. They produce more oil than most birds, which may help keep them warmer when seeking food beneath a stream’s surface.
In most of its habits, it closely resembles its European counterpart, the white-throated dipper, Cinclus cinclus, which is also sometimes known as a water ouzel.
Unlike many water birds, dippers are generally similar in form to many terrestrial birds and do not have webbed feet, but they do have some morphological and physiological adaptations to their aquatic habits. Their wings are relatively short but strongly muscled, enabling them to be used as flippers underwater. To reduce their buoyancy in water, the bones are solid instead of hollow. They have dense plumage with a large preen gland for waterproofing their feathers. Relatively long legs and sharp claws enable them to hold on to rocks in swift water. Their eyes have well-developed focus muscles that can change the curvature of the lens to enhance underwater vision. Their nasal scale flaps prevent water entering their nostrils.
Their blood has a high hemoglobin concentration, allowing a greater capacity to store oxygen than terrestrial birds, and allowing them to remain underwater for up to thirty seconds, whilst their basal metabolic rate is approximately one-third slower than typical terrestrial passerines of similar mass.
Dippers forage for small animal prey in and along the margins of fast-flowing freshwater streams and rivers. They perch on rocks and feed at the edge of the water, but they often also grip the rocks firmly and walk down them beneath the water until partly or wholly submerged. They search underwater for prey between and beneath stones and debris. Their prey consists primarily of invertebrates such as the nymphs or larvae of dragonflies, mayflies, blackflies, stoneflies and caddisflies, as well as small fish and fish eggs, and tadpoles. Molluscs and crustaceans such as crayfish are also consumed, especially in winter when insect larvae are less available.
While underwater, they are covered by a thin, silvery film of air, due to small bubbles being trapped on the surface of their plumage.
Linear breeding territories are established by pairs of dippers along suitable rivers, and maintained against incursion by other dippers. Within their territory the pair must have a good nest site and roost sites, but the main factor affecting the length of the territory is the availability of sufficient food to feed themselves and their broods. Consequently, the length of a territory may vary from about 900 feet to as much as 8,000 feet. They defend this linear territory along streams. This bird’s habit of diving underwater in search of food can infrequently make it the prey of large salmonids like bull or Dolly Varden trout
Dipper nests are usually large, round, domed structures made of moss, with an internal cup of grass and rootlets, and a side entrance hole. They are often built in confined spaces over, or close to, running water. The site may be on a ledge or bank, in a crevice or drainpipe, or beneath a bridge. Tree sites are rare. The usual clutch-size of American dippers is four or five. The incubation period of sixteen or seventeen days is followed by the hatching of altricial young which are brooded by the female alone for the next twelve to thirteen days. The nestlings are fed by both parents and the whole fledging period is about 20–24 days. Young dippers usually become independent of their parents within a couple of weeks of leaving the nest. Dippers may raise second broods if conditions allow.
Dippers’ calls are loud and high-pitched, being similar to calls made by other birds on fast rivers. Their call frequencies lie within a narrow range of 4.0–6.5 kHz, well above the torrent noise frequency of <2 kHz. The song consists of high whistles or trills: “peee peee pijur pijur” repeated a few times. Both genders sing year round.
Dippers also communicate visually by their characteristic dipping or bobbing movements, as well as by blinking rapidly to expose their pale upper eyelids as a series of white flashes in courtship and threat displays.
Dippers are completely dependent on fast-flowing rivers with clear water, accessible food and secure nest-sites. They may be threatened by anything that affects these needs such as water pollution and acidification.
Locally, the American dipper is most likely to be spotted along the Santa Ana River.