Word that the San Bernardino County District Attorney’s Office’s Public Integrity Unit’s routine investigation into Brown Acts violations by the Upland City Council had morphed into an investigation of potential criminal conflicts of interest by councilman Sid Robinson began to spread around the county early this month.
Steve Lambert, a principal in the 20/20 Network, the company with which Robinson was professionally affiliated and which has for some time had a contract with the City of Upland for public relations, communication, strategy formulation and crisis management services, has stated that journalistic coverage of the investigation is irresponsible, misleading, false, damaging to his company’s reputation, defamatory and libelous. He has demanded a retraction of that coverage. According to Mr. Lambert, an article which ran in the July 21 edition of the Sentinel reporting upon the investigation and the background behind it was done “all without corroboration.” Lambert goes on to state that “The entire piece and its presentation are wildly speculative and conspiratorial. The piece loosely attributes the false and malicious allegations to unnamed ‘others,’ and couches some of its more damning allegations with conditionals. While the piece says the ‘investigation’ focuses on councilmember Robinson, the clear inference is that the 20/20 Network is directly linked. Again, this is unsupported by facts and a clear defamatory distortion of the truth. The piece wrongly characterizes my involvement in closed sessions as alleged violations of the Brown Act. In fact, it is not unusual – and not at all improper – for city staff and consultants to attend closed sessions to provide counsel and answer questions councilmembers might have. The story further states, ‘Lambert’s input touched on issues that had no application to personnel issues, litigation, contracts or real estate transactions.’ This, too, is untrue. The piece alleges – again wrongly – that Mr. Robinson “has been vouchsafed positions with government agencies and boards which put him in place to ensure the 20/20 network’s (sic) continued profitability,’ and absurdly points to Mr. Robinson’s attendance at the Southern California Association of Governments’ General Assembly (along with 700 other regional leaders). Mr. Lambert and The 20/20 Network have worked on behalf of SCAG for the past six years, and have a strong ongoing working relationship. Any inference that Mr. Robinson has had some influence in securing business from SCAG is patently false.” 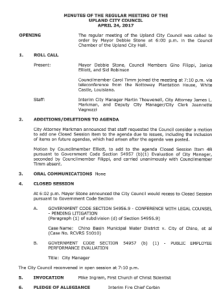 Above is the first page of Exhibit A, the minutes to the April 24, 2017 Upland City Council meeting. This document establishes that the purported justifications for going into closed session at that meeting were to discuss pending litigation and an evaluation of city manager Martin Thouvenell’s performance. Steve Lambert of the 20/20 Network attended that closed session of the city council. His attendance at the closed session would become an intrinsic element of the subsequent Brown Act violation investigation, though the Brown Act cannot be directly applied to Lambert, who is not an elected official himself.

Furthermore, according to Lambert, “The piece states: ‘A critical issue in the investigation is that the 20/20 Network was provided a $3,500 per month contract by Upland City Manager Martin Thouvenell to carry out under the rubric of “strategic communications.” 20/20 has been under contract with the City of Upland since May 2014 under three different city managers. This was not a ‘new’ contract, rather an extension of services. The piece goes on to state: ‘Others, however, maintain that elements of the contract, particularly those relating to the strategic counseling of elected leadership, crisis management and social media monitoring and responses, constitute an illegitimate effort toward information management.’ This inference from unnamed sources inflicts reputational harm on our company.” 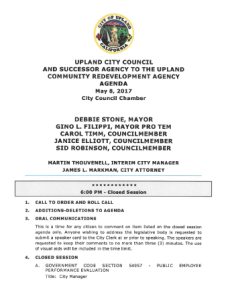 Above is the first page of Exhibit B, the agenda for the May 8, 2017 Upland City Council meeting. This document establishes that the city council was scheduled to go into a closed session at that meeting to discuss the performance of city manager Martin Thouvenell. Steve Lambert of the 20/20 Network attended that closed session of the city council. Lambert maintains that “it is not unusual – and not at all improper – for city staff and consultants to attend closed sessions to provide counsel and answer questions councilmembers might have.” Nevertheless, district attorney’s office investigators’ focus from the outset was on the propriety of the discussions that were taking place in the council’s closed sessions, which under the Brown Act can pertain only to litigation involving the city, personnel issues, real estate transactions, contract negotiations and collective bargaining with unions representing city employees. At issue in the investigation was whether the city council violated the Brown Act by engaging in a discussion that did not pertain to any of these five subjects.

Beginning this week and for the next several weeks as space availability and other editorial constraints dictate, the Sentinel will publish eleven actual exhibits contained in the district attorney’s office’s public integrity unit’s case file relating to the investigation of Sid Robinson that have been provided to the newspaper. This should assist the Sentinel’s readership in assessing for itself whether the Sentinel’s reporting was “done without corroboration,” whether the Sentinel has mischaracterized the evidence, what issues were reported by the Upland city clerk and other city officials to have been discussed during the city council’s closed sessions and the degree to which the Sentinel engaged in “speculation” in undertaking its reporting of the investigation, as well as whether the Sentinel article in general and specific is loaded with “false and malicious allegations” which qualify, in Lambert’s words as “a clear defamatory distortion of the truth.”
Sid Robinson has described the Sentinel article that ran on July 21 as “potentially libelous.” Robinson’s wife has characterized the Sentinel and its news coverage as “disreputable.”
City Manager Martin Thouvenell has likewise demanded a retraction. 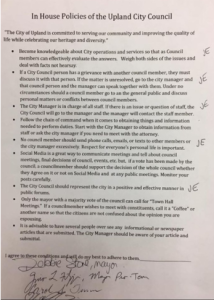 Above is Exhibit C, the so-called “smoking gun” which establishes that the Upland City Council violated the Brown Act. A one-page document, it is a protocol for the behavior of city council members that was discussed and signed or initialed by all five of the city council members during the May 8 closed session. On four separate occasions, city officials including city attorney Jim Markman have been unable to explain under what legal rubric this document could be discussed and validated during a closed session of the city council Steve Lambert of 20/20 Network was in attendance at this closed session. Councilwoman Janice Elliott in May made a report to the district attorney’s office in which she said this meeting in particular was a violation of the Brown Act in that issues the council was not legally entitled to deliberate on in private were discussed.

Because space constraints prevent displaying all twelve of the investigative file exhibits together, they may come across to the casual reader as lacking sufficient context. The reader might best be oriented to this context by finding a copy of the July 21 Sentinel and reading the article “Robinson Denies Upland’s Contract With His Affiliate Constitutes A Conflict.”
This week the Sentinel features exhibits A, B and C from the investigation file for Sid Robinson. Taken together, these three items illustrate the substance that was at the basis of the original investigation into the Brown Act violations that ultimately, by extension, brought the circumstance involving councilman Sid Robinson and his relationship to the 20/20 Network into focus for the investigators.
In the upcoming August 4 edition, the Sentinel will provide glimpses of exhibits D, E, and F, respectively, the minutes from the May 8 council meeting which provide no mention of the discussion of council behavioral protocol or the “In House Policies of the Upland City Council;” the agenda for the June 12 meeting containing the agenda item to remove councilwoman Janice Elliott from three of her committee assignments; and the minutes of the June 12 meeting in which Elliott was in fact removed from those committee assignments. Thereafter, the Sentinel will publish Exhibits G, H, I and J, respectively, Sid Robinson’s statements of economic interest showing his status as a “subcontractor” with the 20/20 Network; a narrative from Steve Lambert hailing Sid Robinson as having joined the 20/20 Network as one of its public relations professionals; the page from the minutes of the April 24 Upland City Council meeting appointing Robinson as the city’s representative to the Southern California Association of Governments; and a press release produced for the Southern California Association of Governments by Steve Lambert and the 20/20 Network.