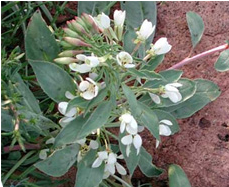 Booth’s sun cup, which is also sometimes called Booth’s evening primrose, is a wildfflower in the camissonia genus within the onagraceae family. Its scientific name is eremothera boothii and known to grow in among coastal sage scrub, and within pinyon-juniper, foothill and Joshua tree woodlands, as well as within valley grasslands.
Flowering in the Mojave Desert from March to June and from April to August elsewhere, the plant is native to the western United States and northwestern Mexico, where it is most abundant in arid areas such as deserts. This is an annual plant with hairy reddish-green stems and mottled foliage. The stem ends in a nodding inflorescence of many small flowers which may be white to red or yellowish, often with darker shades on the external surfaces of the four spoon-shaped petals. The flowers are accented by reddish stems and buds. They have long stamens with clublike yellowish anthers. Flowers of this species tend to open at dusk rather than dawn as in many other camissonia. The fruit is a twisted capsule one to 3 centimeters long. Plant appearances may vary across subspecies.
Leaves are elliptic and vary considerably in size according to the availability of sunshine, water, and subspecies. The plant usually sports a rosette of leaves clustered at base.

Sources include one or more of the following: Wikipedia, the California Consortia of Herbaria, Calflora, CNPS Manual of Vegetation Online, CalPhotos, Jepson Flora Project, Las Pilitas, Theodore Payne, Tree of Life, The Xerces Society and the University of California at Berkeley Botany Department.