When he was called upon to be sworn into office at Monday night’s Upland City Council meeting, newly elected Upland District Three Councilman Ricardo “Ricky” Felix sallied forth with a retinue of four others – his wife Kelsie and his three daughters, aged six, four and two. As his wife held the two-year-old with one arm and the microphone for her husband in her opposite hand, the four-year-old and the six-year-old stood between their father and Jim Thomas, a congregant at the Upland temple of The Church of Jesus Christ of Latter Day Saints which Felix and his family also attend. With Thomas guiding him through the oath of office, Felix, his right hand raised and his left hand resting on the Book of Mormon, vowed to abide by the U.S. and California Constitutions in carrying out his municipal duties over the next four years. 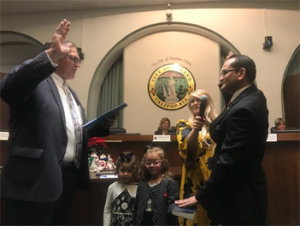