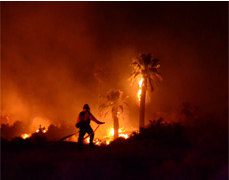 At least three palm trees and considerable vegetation at the Oasis of Mara were consumed or sustained significant damage in a fire that was deliberately set at the historic landmark on March 26.
A 26-year-old man, believed to have been responsible for starting the blaze, was taken into custody at the scene of the fire, which was contained to 2.5 acres by responding firefighters.
The oasis, located directly behind the Joshua Tree Oasis Visitor Center and Joshua Tree National Park Headquarters, was encountered by early American survey parties in the 1850s, centuries after the indigenous people of the area had been tapping into it as a source of water.
The oasis was first settled by the Serrano, who referred to it by the word “Mara,” translated as “place of little springs and much grass.” Legend is that a medicine man recommended the spring water, which he claimed would have the effect of blessing those who drank it with “many boy babies.” Per the medicine man’s instructions, the Serrano planted a palm tree at the oasis with the birth of each boy into a nearby clan. At one point there were 29 palm trees at the site and the name “29 Palms” was given to the area, which before the turn of the 19th to the 20th century was attracting miners and cattlemen.
According to authorities, a call just after 9 p.m. on Monday summoned the San Bernardino County Fire Department, the National Park Service/Bureau of Land Management Fire Division, and National Park Service rangers and San Bernardino County sheriff’s personnel to the oasis.
The conflagration blazed spectacularly and dramatically as safety personnel arrived, with two fireballs, one half way up one palm tree and another near the apex of another palm tree illuminating the night sky.
Even before the flames were fully doused, rangers were in contact with George William Graham, who was still at the scene of the fire. Upon questioning, according to authorities, Graham acknowledged using a cigarette lighter to ignite flames at multiple spots around the oasis.
As of Tuesday morning, rangers terminated public access to the oasis. A preliminary damage assessment is that two palm trees are damaged beyond recovery and a third was substantially impacted, along with ground vegetation and some as-yet-unidentified archaeological resources at the site. No date for the reopening of the oasis to the public has been set.
Graham, who has previous convictions for arson in 2015 and burglary in 2013, was charged by federal authorities with arson on March 28.
-Mark Gutglueck