A full year after massive earthmoving machinery was transported up Orange Avenue and Holly Circle Drive and ultimately into place near where grading was initiated to accommodate the San Manuel Tribe’s development plan for upwards of 30 hillside mansions on property adjacent to the unincorporated county land at the northeast corner of the City of San Bernardino, problems relating to the impacts on adjoining properties intensified this week.
On most weekday mornings over the last year, vehicles carrying construction workers began to traverse the roads leading toward the construction site at about 6:15 a.m. That circumstance was no different this week, as the construction company employed by the tribe, Sukut, had scheduled progress toward the completion of the project to continue apace. On Tuesday March 20, the use of the road intensified, as equipment needed for the next and even more intensive phase of development began to arrive at the worksite. Tuesday passed without major incident, but just prior to 7 a.m. on Wednesday March 21, difficulty arose, which grew out of a veritable logjam of additional construction equipment on the roadways leading to the construction site.
The Sentinel has learned that at least one of the crew supervisors for the project had not anticipated that equipment and material would come onto the property until early April. Moreover, the roads across which the equipment was to be conveyed appear to have been unequal to the weight of the equipment.
The area is surrounded by steep hillsides, and the existing upscale and often unique residential properties along Holly Circle Drive are vulnerable to landslides or other hazards which have been created, or yet could be triggered by, the compromising of the integrity of the nearby mountains and hillsides as a result of the grading and construction activity. In addition, the grading of the property has exacerbated erosion in the area, such that runoff and flooding has led to the accumulation of silt and debris on the streets and within the storm water channels and culverts designed to prevent flooding of the properties along Holly Circle Drive and upper Orange Avenue.
By 7 a.m. Wednesday morning the vehicle flow through the area in both directions had come to a standstill, as trucks pulling trailers carrying construction equipment as well as mobile construction team structures converged on the area at or near the confluence of Orange Street and Holly Circle Drive. Holly Circle Drive is serpentine in nature, very narrow in certain spots as it winds around the contour of the hills. It has no sidewalks or curbs, with numerous blind curves. It terminates with no outlet. Its pavement is at least five decades old, is degrading and cracking along much of its expanse, and it proved insufficient not only to support the weight of the vehicles traversing it but insufficiently wide to allow the vehicular traffic coming up behind one of the vehicles stuck in the rut it had created as a consequence of its weight to progress upward or allow the traffic above it to come downward.
Two oversized portable construction trailers on flatbeds that could not make it up the road or around the bend were at the epicenter of the clog. The intrepid driver of one vehicle slowly and with great difficulty, apparently in defiance of the construction site supervisor, Russ Nygren, backed down the hill, his line of sight hampered by the massive load he was pulling. The driver was not following Nygren’s instruction to remain in place, causing considerable consternation among those there. Another oversized flatbed drove forward and turned on private property, tearing up the ground and the thinner asphalt on driveways and driveway aprons, creating holes. Essentially, the residents of the area were trapped at that chokepoint, which hemmed in and rendered immovable a parade of oversized vehicles and trucks. Though a number of local residents walk the area regularly, pushing strollers or accompanying children and pets, such activity on Wednesday and Thursday was prohibitively dangerous. 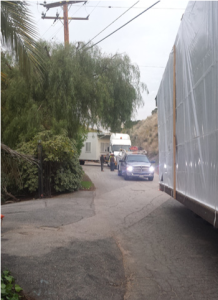 According to Nygren, Sukut’s site supervisor on the project, the trailers had arrived two weeks ahead of schedule. The next phase of development on the project, one even more intense than what has occurred over the last year, is about to commence. Nygren confirmed that many of the vehicles toting trailers loaded with earthmovers and other large scale equipment could not make it up the road. The drivers of the vehicles, employed by the two different companies that are apparently subcontractors to Sukut – Maros and FAT – were not following Nygren’s instructions, which he indicated exacerbated the road clogging situation.
Tribe security officers/police officers employed with the tribe at one point arrived but appeared to be ineffective in defusing the traffic blockage.
Mark Persico, the City of San Bernardino’s community development director, on Thursday told the Sentinel, “The city is very much aware of this. We’re in fairly constant communication with the tribe. The land being developed is on tribal lands, so they follow their own construction requirements. They didn’t get permits for the development itself from the city and were not required to. And they didn’t get hauling permits from us unless they did go across our streets and are impacting them in any significant way. I will have our public works director look into it. At this point, I don’t know if they got a permit. The tribe controls a lot of the land leading to the construction site. It is possible that if they are crossing city streets they will need to have gotten a heavy hauling permit from the city.”
Persico continued, “The other issue we might have is debris in the streets, which is something we will address on an ongoing basis as the project moves along. We have an ongoing dialogue with them, so the public works director is making sure that our streets are maintained. If any debris [from foothill runoff from rains as a consequence of construction activity] ends up in our [drainage] basins, they have to clear it out. That is their responsibility.”
As to wear and tear on the streets from the transit of heavy equipment over them, Persico said, “We do have lots of older streets. That’s the whole reason for getting heavy hauling permits. When they do, we monitor the condition of the streets before and after the movement across them to make sure if a street is damaged it is put back into its previous condition.”
Persico indicated he had not been told as of Thursday morning about the damage that had occurred on Holly Circle Drive the previous day, but said, “I can talk to the public works director and find out if anything happened when they crossed one of our streets. I don’t know right now if they had to get a permit, and if they were supposed to get one and didn’t, we will work with them to get things into order.”
–Mark Gutglueck