One of the bald eagle chicks whose hatchings in Big Bear earlier this year were closely watched and widely celebrated died yesterday. It is believed to have fallen victim to the elements, as an early spring downpour and below freezing temperatures at the 6,800-foot level in the San Bernardino Mountains doomed the creature that was previously anticipated to fledge by April.
A pair of eagles adopted an existing nest in Big Bear last year. The nest was conveniently within scope of a video camera that had been installed by the Friends of Big Bear Valley several years ago. Consequently, when the female laid one egg and then another the first week of January, the pair’s progeny looked to be a quintessential Third Millennium phenomenon, inherently wild animals living in their natural habitat which would by the miracle of technology be subject to close human observation and monitoring.
Indeed, the female who had laid the eggs, given the name Jackie by biologists, was a creature familiar to biologists, ornithologists, bird lovers and U.S. Forest Service naturalists in the San Bernardino Mountains and the San Bernardino National Forest. Jackie had come into the world in 2012, the first bald eagle recorded to be hatched in the San Bernardino Mountains, an event that was much remarked upon at the time.
Because bald eagles will abandon nests if disturbed, the Forest Service moved to close the area around the nest to all public entry through June 22, the duration of the nesting season, giving the eggs as best of a shot of achieving viability as possible.
Despite the lack of immediate human access to the spot, with the video camera in place, locals and others throughout Southern California, the state, nationally and even internationally were able to watch the livestream of the nest. Both the male and female took turns incubating the eggs, though the female did most of the sitting. The bird that left the nest during this period would use the time away from the nest to hunt and would return with food for its mate.
The broadcasted vigil intensified at the end of the first week in February, and on February 10 and February 11, one egg and then the other hatched. The chicks were dubbed “Stormy” and “Baby Big Bear” or “BBB,” for short.
The two chicks appeared to be getting on and along. Winter 2018 had not been a particularly wet season, and temperatures throughout February were comparatively mild. It was not until March that a late winter blew through Southern California, bringing with it rain and, over the last two weeks, the coldest temperatures of the year.
A storm came into Southern California this week. Thursday night, four inches of rain fell on the mountains and thermometers in the Big Bear Area registered into the mid to low-20s, well below freezing.
BBB found this week challenging. Eagles do not feather early and BBB’s lack of down left him exposed to the chill. Jackie sought to protect him and his sibling by hovering over them within the nest, but on Thursday things had hit a critical level.
Both chicks were still alive at 2:30 a.m. this morning, but the temperature in Big Bear was yet plummeting.
At 8:43 a.m. this morning a tweet from the San Bernardino National Forest Administration went out. It stated, “We are sorry to report that one of the eagle chicks has died, possibly due to the storm (4” of rain, below freezing temps).” 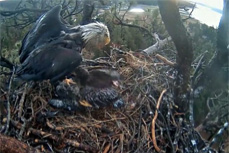 Despite the disappointment, there was a relative upside.
“The other appears to be doing okay this morning,” the tweet said. “We hope to continue to watch it grow and fledge over the next month.”