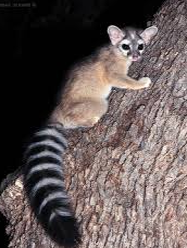 The ringtail is a mammal of the raccoon family and is native to arid regions of North America, including the Mojave Desert. Scientifically it is known as Bassariscus astutus, and is also referred to as the ringtail cat, ring-tailed cat, miner’s cat or bassarisk, and is also sometimes called a “civet cat,” after similar, though unrelated, cat-like omnivores of Asia and Africa. The ringtail is not a cat and it is not a civet, despite the confusion with these creatures. It is also referred to as a cacomistle, which indicates further confusion with the Bassariscus sumichrasti.
Buff to dark brown in color with white underparts and a black and white “ringed” tail longer than the rest of its body that has 14 to 16 white and black stripes, the ringtail has short, straight, and semi-retractable claws and large and black eyes surrounded by a patch of light fur. It is smaller than a house cat and is one of the smallest extant procyonids. It measures 12 to seventeen inches long to the base of the tail with the tail adding another 12 to 17 inches. It can weigh from 1.5 to 3.3 pounds. Ringtails have occasionally been hunted for their pelts, but the fur is not especially valuable.
Ringtails possess superb hearing and eyes that allow them to move about at night. In addition to its tawny to grayish fur, it has a pointed muzzle with long whiskers, resembling in some degree a fox. The ringtail uses its tail for balancing when moving about its habitat. The tail also serves to distract some potential predators. The white rings provide predators with a focus other than the ringtail itself; by grabbing the tail rather than the body, the ringtail has a greater chance of escaping. Additionally, their semi-retractable claws and long tail provide the ringtail with tools ideal for climbing.
Ringtails are found in Central America, Northern South America, in the Cloud Forest of Panama where it is called the Cacomistle, California, Colorado, eastern Kansas, Oklahoma, Oregon, Arizona, New Mexico, southern Nevada, Texas, Utah and throughout northern and central Mexico.
Ringtails prefer a solitary existence but may share a den or be found mutually grooming one another. In areas with sufficient water, as many as 50 ringtails may occupy a square mile. Males are likely to have a territory of 50 to 100 acres, and their territories occasionally intersect with several females. Ringtails utilize excretions as a way to mark territory.
They exhibit limited interaction except during the breeding season. Occasionally they fall prey to foxes, coyotes, bobcats, lynxes, and mountain lions, raccoons, bobcats, hawks and owls, all of which will opportunistically prey upon ringtails of all ages, though most predominantly younger, more vulnerable specimens. The ringtail is rather adept at avoiding predators, which is largely attributed to its ability to excrete musk when startled or threatened. The main predators of the ringtail are the Great Horned Owl and the Red-tailed Hawk.
Ringtails feature very flexible ankle joints that are able to rotate over 180 degrees, a trait that makes them agile climbers. Their considerable tails provide them with balance for negotiating narrow ledges and limbs, even allowing them to reverse directions by performing a cartwheel. Ringtails also can ascend narrow passages by pressing all feet on one wall and their back against the other or pressing both right feet on one wall and both left feet on the other, a feat called stemming. They can also make their way within wider cracks or openings by ricocheting between walls.
They produce a variety of sounds, including clicks and chatters reminiscent of raccoons. A typical call is a very loud, plaintive bark.
Much like the common raccoon, the ringtail is nocturnal. It is also timid towards humans and seen much less frequently than raccoons. Despite its shy disposition and small body size, the ringtail is arguably the most actively carnivorous species of procyonid, as even the closely related cacomistle eats a larger portion of fruits, insects and refuse. Small vertebrates such as passerine birds, rats, mice, squirrels, rabbits, snakes, lizards, frogs and toads are the ringtail’s dinner fare in winter. Occasionally the ringtail will also eat fish, lizards, birds, snakes and carrion. The ringtail is nevertheless omnivorous, as are all procyonids. Berries and insects are important in their diet year-round and become the primary part of the diet in spring and summer along with fruit. The ringtail also enjoys juniper, hack and persimmon, prickly pear, and fruit in general. They have even been observed partaking from hummingbird feeders, sweet nectar or sweetened water. Ringtails tend to prey on whatever is most abundant during each respective season.
As adults, these mammals lead solitary lives, generally coming together only to mate. Mating occurs in the spring. The gestation period is 45 to 50 days, during which the male will procure food for the female. There will be two to four cubs in a litter. The cubs open their eyes after a month, and will hunt for themselves after four months. They reach sexual maturity at ten months. The ringtail’s lifespan in the wild is about seven years.