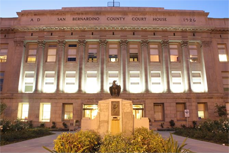 Howard Jones was an architect of note who worked in San Bernardino and elsewhere in Southern California in the early part of the 20th Century. It is believed he was born in San Bernardino on September 27, 1885, the son of printer Albert Prescott Jones.
There is no record indicating he was highly educated. However, his uncle, Charles H. Jones, of the firm Jones and (Theron) Palmer, was an architect and this may have been how Howard got his start in the profession.
In 1910 Howard was working as a “draughtsman” for an architect. He later moved to Los Angeles and went to work as a draftsman for one of the leading architects there, Norman F. Marsh. The Marsh firm designed some Carnegie libraries that were being built at that time, and Howard may have done drafting work on some of these as early as 1910. By 1915, he was designing homes.
It is known that by 1922, Howard Jones redesigned the front of McInerny’s Dry Goods Store in the 470 block of Third Street in San Bernardino. In 1923 Jones designed what was called a “business court,” a group of buildings located on Fourth Street midway between D and E.
In 1925, Jones, working in conjunction with J. P. McNeil, produced the design for the Platt Building, a multi-stored structure at the corner of Fifth and E Streets commissioned by the Frank C. Platt Investment Company. It housed nine shops on the ground floor, and had offices for doctors, dentists and lawyers on the upper floor. The entrance to the offices was through a marble vestibule, with elevator service provided. President Lyndon Johnson, who resided in San Bernardino in 1925, was employed as the first elevator operator in the Platt Building.
The county courthouse built in San Bernardino in the 1890s was designed by his uncle, Charles Jones. It was severely damaged in a 1923 earthquake. The county board of supervisors called upon Howard Jones to determine whether repairs to the old courthouse should be undertaken or whether an entirely new structure should be built. It was decided it would be better to replace the old courthouse. Howard Jones designed the new courthouse, which yet exists, with the assistance of another architect, DeWitt Mitcham. The courthouse was completed in December 1926.
His next major project was the Andreson Building, a five story structure above ground with a basement below that had a 56-foot frontage on Third Street and an 148-foot frontage on E Street. Jones designed the building in 1927, mainly to accommodate the original ground floor tenant, the Merchant National Bank.
Also in 1927, Jones designed the Harris Company, arguably the most iconic building in San Bernardino.
Later in his career, Jones designed a number of schools, including Eliot Elementary, Harding Elementary, Richardson Junior High, and the San Bernardino Valley College Administration Building.