Early this year, the City of Upland’s move to divest itself of its municipal fire department and annex the entirety of the city into a county fire service assessment zone to allow the county fire department to assume fire protection duty in Upland precipitated controversy. When Councilwoman Janice Elliott, who had initially lined up with her council colleagues in supporting the annexation, began indulging the questions and protests of her constituents who opposed the fire protection service change, the other members of the council became increasingly dismayed at her action. At the April 24, 2017 and May 8, 2017 Upland City Council meetings, the council adjourned itself into a closed session, during which the discussion went beyond the scope of subjects – potential or ongoing lawsuits, real estate transactions, contract negotiations, employee discipline or firing, and employee public union collective bargaining – that a public governing board can discuss outside the scrutiny of the public according to the Ralph M. Brown Act, California’s open public meeting law. 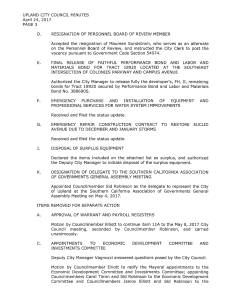 Above is the third page of Exhibit A in the Sid Robinson investigation file, the minutes for the April 24 meeting of the Upland City Council, which show that the council selected Sid Robinson to act as the city’s representative at the May 4 meeting of the Southern California Association of Governments General Assembly.

Present during both the April 24 and May 8 closed door sessions was Steve Lambert of the 20/20 Network, the city’s public relations consultant. Shortly thereafter, Elliott approached the San Bernardino County District Attorney’s Office with concerns that the council had engage in violations of the Brown Act. The district attorney’s office launched a routine and low key investigation into the matter. When city officials learned of Elliott’s action, her already compromised position on the city council deteriorated even further and she became a de facto persona non grata on that panel. .An object demonstration of the low esteem in which Elliott was newly held came at the June 12 city council meeting when all four of her council colleagues voted to strip her of three of her most prestigious adjunct committee assignments. That move was widely seen as retaliation against her for having brought the district attorney’s office’s attention to the alleged Brown Act violations. The action against her did not escape the attention of the district attorney’s office, which intensified its investigation into the Upland situation. In short order, investigators, either through their own initiative or by tips provided by members of the Upland community, learned that councilman Sid Robinson was or once was a professional affiliate of both the 20/20 Network and Steve Lambert. Cross referencing Lambert’s presence at both the April 24 and May 8 city council meetings, where the Brown Act violations were alleged to have occurred, with his relationship with Robinson, investigators further learned that Robinson, since coming into office, had voted numerous times to approve the city’s payments to the 20/20 Network. Both Robinson and Lambert maintain that there is no conflict in the circumstance of the 20/20 Network performing contract work for the city and Robinson’s council service, since the contract was in place before Robinson acceded to the city council, Robinson has made no votes to alter or increase the contract and Robinson ended his affiliation with the 20/20 Network before he joined the city council. 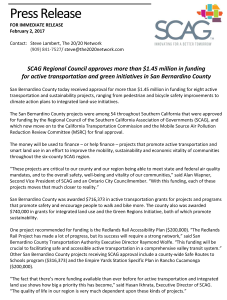 This press release was prepared for the California Association of Governments by Steve Lambert of the 20/20 Network. Lambert and Upland City Councilman Sid Robinson maintain that Robinson ended his professional affiliation with the 20/20 Network in December 2016.

As chance would have it, at the April 21 meeting of the city council, the council appointed Sid Robinson to represent the city at the Southern California Association of Governments General Assembly Meeting on May 4, 2017. Lambert and the 20/20 Network have a contract to do public relations work with the Southern California Association of Governments. That, too, did not escape the investigators’ attention.
On July 21, the Sentinel published an article that reported on the investigations, both the original one into the alleged Brown Act violation and the one relating to Robinson and the 20/20 Network that ensued from it, and the issues being focused upon. Steve Lambert, Sid Robinson and Upland City Manager Martin Thouvenell took exception to the Sentinel’s report, and in short order lodged demands for retraction from the Sentinel. Lambert characterized the Sentinel’s journalistic coverage of the investigation as irresponsible, misleading, false, damaging to his company’s reputation, defamatory and libelous, as well as “wildly speculative and conspiratorial.” Robinson called the article “potentially libelous.” Thouvenell said the article contains “malicious and inaccurate statements.”
Beginning with the July 28 edition, the Sentinel has been publishing the documents and materials upon which the research for the July 21 article was based, providing in serial format exhibits within the district attorney’s office’s case file on the investigation into the Brown Act violation and Sid Robinson’s relationship with the 20/20 Network. The Sentinel is doing this so its readership can ascertain for itself whether the July 21 article was in any way unfair to Mr. Lambert, Mr. Robinson or Mr. Thouvenell and if the reporting went beyond the facts contained in the documentation the Sentinel relied upon in its research of the issues relating to the investigation. This week the Sentinel is publishing page three of Exhibit A, the minutes of the April 24 Upland City Council meeting at which councilman Robinson was designated the city’s representative at the May 4 Southern California Association of Governments General Assembly Meeting and the first page of Exhibit J, a February 2, 2017 Southern California Association of Governments press release prepared by Steve Lambert and the 20/20 Network.
While examining the individual investigative file exhibits piecemeal or in installments may provide the casual reader with insufficient context upon which to make any type of judgment, the reader should be able to orient him or herself to the germane issues by finding a copy of the July 21 Sentinel and reading the article “Robinson Denies Upland’s Contract With His Affiliate Constitutes A Conflict” and the July 28, August 4, August 11, August 18 and August 25 editions of Sentinel which included Sid Robinson investigative file exhibits showing how the original Brown Act investigation evolved to the point that the circumstance involving councilman Sid Robinson and his relationship to the 20/20 Network came into focus for the investigators.