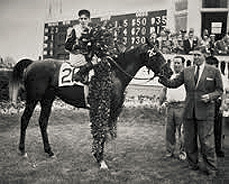 By Mark Gutglueck
Andrew Joseph Crevolin was at one time a highly celebrated native son of Ontario, a successful businessman who was even more successful as a California thoroughbred racehorse owner.
Born on December 22, 1905, Crevolin graduated from Chaffey High School in 1924. By the mid-1930s, he was a successful Chrysler-Plymouth car dealer for eastern and northern Los Angeles, and his holdings included the Chrysler dealership at Main Street and Bushnell Street in Alhambra.
As his automobile business prospered, he invested in various enterprises, including water resource companies, real estate, and horses.
In the 1940s, he established in Alhambra one of California’s most impressive stables of thoroughbreds, located south of Poplar Boulevard at the bottom of the hill between Main Street and Fremont Avenue.
Early on, Crevolin employed Frank Childs as a trainer. In 1948 his filly, Flying Rhythm, trained by Childs, won the Hollywood Oaks. Subsequently he employed George Mayberry as a trainer. The Mayberry-trained Be Fleet won the San Juan Capistrano Handicap in 1951 and achieved a three-length win over the great Citation in the Argonaut Handicap. In 1953, Bill Molter succeeded Mayberry as Crevolin’s lead trainer.
In 1954, Andrew Crevolin’s four-year-old Imbros won multiple stakes, in doing so setting a new world record for seven furlongs in winning the 1954 Malibu Sequet Stakes at Santa Anita Park and equaled the world record for eight and a half furlongs in winning the 1954 Californian Stakes at Hollywood Park Racetrack. In addition to setting new track records at Santa Anita and Hollywood Park, Imbros also twice equaled the Santa Anita Park track record for six furlongs. He then set two new track records for eight and nine furlongs at Bay Meadows Racetrack.
Imbros, however, was Crevolin’s second most successfully horse in 1954.
In 1951, the grand-daughter of Seabiscuit, owned by breeder Dr. Eslie Asbury, had a foal, Determine. In 1952, Asbury sought to sell Determine, at the Keeneland Summer Sale. As a gray, uncommonly small colt, Determine was overlooked, despite its lineage, by most bidders. Crevolin, for just $12,000, snatched the horse up.
Determine reached a height of fifteen hands, well below the sixteen to seventeen hands of a typical race horse, and weighed in at just 900 pounds, significantly below the 1,000 to 1,100 pounds of most race horses.
Shortly after the purchase, Asbury offered to buy Determine back since the colt lacked the size most owners were looking for in a racehorse. But Crevolin declined to return the horse. Instead Molter set about training the horse in earnest.
As a two-year-old, Determine demonstrated real promise, winning the Santa Anita Derby and some other significant West Coast races. A debate between Andy Crevolin and Willie Molter ensued over whether to enter Determine into the Kentucky Derby as a three-year-old. Crevolin pushed the idea, though Molter felt the colt was too small. Crevolin prevailed, and Determine was flown to Kentucky in the spring of 1954 to run in the Derby’s qualifying races. On April 17, 1954 Determine finished second to Hasty Road in the Kentucky Derby Trial, losing to the much larger horse by a head in a classic side by side race in the stretch. At the May 1, 1954 Kentucky Derby, both despite and because of his diminutive size, the betting odds on Determine were impressive, as some saw the horse’s demonstrated ability to squeeze through small holes when boxed in by larger horses and his light weight and nimble acceleration in cramped situations as a potential advantage in that day’s field.
Almost immediately out of the gate, Determine was roughed up so badly in a jam caused by Hasty Road and Timely Tip that he nearly lost his jockey, Ray York. York stayed in the saddle and by the middle of the race Determine had positioned himself into third place. Hasty Road, the largest horse in the race, was clearly in the lead. In the final turn, Determine did not fade, moving into a neck and neck battle in the final stretch with Hasty Road. At the finish, Determine had moved ahead of Hasty Road to win by a length and a half, the first “gray” to win the Kentucky Derby.
Also on May 1, Imbros won the William P. Kyne Handicap, making Andrew Crevolin the first person in the United States to ever win two $100,000 races on the same day.
In 1950, Andrew Crevolin had been appointed a member of the board of directors of the Sister Kenny Rehabilitation Institute and would become chairman of its Southern California Chapter’s fund drive committee for expansion of the Sister Kenny Memorial Hospital in El Monte, California.
Andrew Crevolin was the owner of the San Dimas Land & Water Company in San Dimas, California where he owned a home and had substantial land holdings, some of which he would develop for residential housing. In December 1964 he was appointed a member at large on the Los Angeles Watershed Board for the First Supervisorial District.
Divorced in February 1962 from his third wife, Jane Anne, on September 24, 1966, Andrew Crevolin married Tony Award-winning actress Dolores Gray. They made their home at his Oak Ridge Ranch near San Dimas in the East San Gabriel Valley.
Crevolin remained in racing for a several more years. By 1961 his trainer was Edward A. Neloy who conditioned Mighty Fair to a win in the Ladies Handicap at New York’s Aqueduct Racetrack.
Andrew Crevolin was living in Pasadena at the time of his death in 1992.