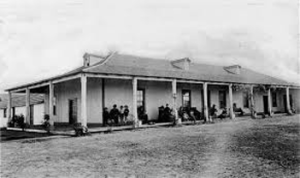 The Yorba-Slaughter Adobe was built by Raimundo Yorba in 1850-53 on land once thought to be on Rancho El Rincon, a land grant owned by his father, Bernardo Yorba, but later determined not to have been part of the Rancho. Raimundo Yorba lived in the adobe until 1868, when Forty-niner and Mexican-American War veteran Fenton M. Slaughter, who later served in the California State Assembly, bought the house. In this photo are seen from left to right: Fenton M. Slaughter; Mrs. Florisa Slaughter Meredith; Isadora, an Indian member of the household; Henry Kline (sometimes known as the Hangman, as he had been employed by the sheriff as executioner on several occasions); Mrs. Fenton M. Slaughter, granddaughter of Juan Nepomeceno Alvarado, the last major domo, or chief steward, at San Gabriel Mission; and Mrs. Lorinda Slaughter Wells.
In 1928, Slaughter’s daughter, Julia Slaughter Fuqua, began the rehabilitation of the adobe, which was designated a California Historical Landmark on June 20, 1935 and added to the National Register of Historic Places on July 7, 1975. The adobe is now a branch museum of the San Bernardino County Museum, and features an 1890s period general store.