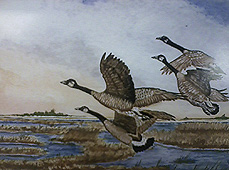 Painting By The Mayor

Relatively late in life he took up painting, gravitating primarily to landscape and nature subjects, sometimes traveling to the mountains, the river or places like Yosemite for inspiration. He had some of his work published on postcards under the label Painting by the Mayor.
His wife, Lois, predeceased him by 19 years, dying in July 1993.
Howard Snider died in September 2012 at the age of 83. He was survived by his daughter, Sharon Speer; son, Joshua Joseph; and grandchildren, Coltrane Snider, Austin Speer, Kathryn Speer and Laine Speer.