By Mark Gutglueck
Dennis Hansberger, a central figure within the Redlands political and financial establishment who served 20 years on the San Bernardino Board of Supervisors over the course of nearly four decades and adroitly used the political revolving door to capitalize on his insider knowledge in the role of a lobbyist once he was out of elected office, has died.

As must all mortals, Hansberger this week made his exit from this world, in his case peacefully and with members of his family near him. His last weeks, days, hours and minutes were spent in Redlands, the epicenter of the county’s old guard and old money, which, while Hansberger was yet one of its prime movers and most dynamic operators, gave way to the upstart Young Turks in Ontario, Rancho Cucamonga and Fontana who created an economic synergy that shifted the power balance to the west end of the county in the 1970s, 1980s 1990s and 2000s.
Hansberger came to social and political prominence within the context of the Redlands political machine, in no small part because of assistance from his father, Leroy, who had become a part of the East Valley Establishment in the generation prior to Dennis Hansberger’s rise to public life.
Despite having well-heeled and highly influential distant familial relations elsewhere in the country, Leroy Hansberger had as legitimate of a claim to being a self-made multimillionaire as anyone. Driven by an uncommon work ethic, he had come while he was still a child with his mother, Irma Lee Hansberger and stepfather Arthur Fagg, from Los Angeles where he was born in 1918, to Yuciapa, where his family worked a farm on Third Street. That farm initially consisted of a few cows, poultry and rabbits and mostly apple groves, which were eventually converted to peaches and plums and other crops when the coddling moth wreaked havoc on the farm’s apples.
From about the time he was 12, Leroy was functioning as the head of his family, doing a good half of the work on the farm. Even before he had graduated from Redlands High School in 1936, he had made a foray into the world of business outside the family farm, delivering groceries from Sawyer’s Market along with newspapers.
By the time he was 22, Leroy Hansberger owned his own trucking company, which had come about when he traded the car he was using to make deliveries for a truck. He used the proceeds from the trucking company to bootstrap himself up further, purchasing Tri-City Concrete and Tri-City Rock Company, located in Redlands. With the combined income from the trucking company, the rock company and the concrete company, he began purchasing property, at first an acre or two at a time, then larger and larger parcels. Among his purchases was the 240-acre El Dorado Ranch; the 140-acre Ford Apple Ranch in Yucaipa, which he bought from Fred Ford, along with another large spread Ford owned, the Snow-Line Orchards; and a substantial portion of the Martin Ranch in Yucaipa. Leroy Hansberger subdivided the latter property into the Rolling Hills Estates. Over the course of several decades, he owned over a thousand acres, much of which he developed either residentially or commercially. Other real estate holdings he had were spun off at a profit to others who developed them.
With his wife, Helen, Leroy Hansberger had four sons, all of whom were given names that started with the letter D: David, Dennis, Doug, and Don. 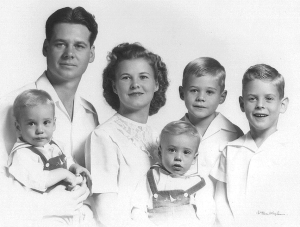