By Mark Gutglueck
Harvey Linford Drew was a major figure in the business community of San Bernardino and its environs in the 1870s, 1880s, 1890s and shortly after the turn of the 19th to the 20th Century. 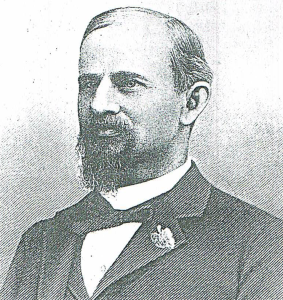 Born in Milton in Cass County, Michigan on November 6, 1839, the son of Oliver Drew and Ann Drew, née Woods, H.L. Drew, as he was referred to, as a young man was involved in lumbering and merchandising. With the advent of the Civil War, he enlisted in the Union Army, in Company L, 2nd Calvary, as a corporal on September 16, 1861 at Niles, Michigan, committing to a three-year hitch. He was then 21 years of age.  He mustered on October 2, 1861 and was transferred to the 3rd Cavalry on November 2, 1861, four days before his 22nd birthday as a regimental commissary sergeant.  He was commissioned a second lieutenant with Company K, on August 13, 1862. He was commissioned a first lieutenant with Company M, on December 20, 1862. He was mustered on February 27, 1863. He was commissioned a captain on October 24, 1864. He resigned and was honorably discharged on November 14, 1864. His brother, Perry Green Drew, who was born in 1844, served with the 3rd Michigan Cavalry at the same time he did. 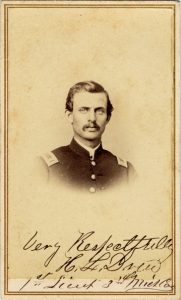 Harvey Drew was a dashing young cavalry officer in 1862.

After his stint in the military, Harvey Drew returned to logging and in 1866, he married, without the consent of her father, Alpha Aldrich.
The Great Michigan Forest Fire in the Fall of 1871 proved a test of his mettle and hardiness. The overwork and exposure to heat and smoke in fighting the fire at one point for seven straight days and nights greatly compromised his health. In 1874, in the company of Alpha, two of his children and his brother Perry, who was at that point a doctor, he came to California. He spent a short time in Sacramento, San Diego and Los Angeles before moving to San Bernardino permanently in April 1875. .
Drew engaged himself in trade, connecting himself with mining interests who came into San Bernardino, and he engaged in the mercantile business in San Bernardino and was involved in banking based in Los Angeles at that time.
The Valley Reservoir Company was formed and was incorporated on October 2, 1883 with a capital stock of $360,000 and with H.L. Drew among its eleven stockholders.
In May 1881, the Farmers’ Exchange Bank of San Bernardino, the second bank to be established in San Bernardino and the first bank to be incorporated within the city, was organized as a State bank, and located on the north side of 3rd Street between D and E streets, very close to property that Drew owned. The officers were Byron Waters as president, Richard Gird as vice president and E. H. Morse, cashier. The Farmers’ Exchange Bank opened its doors for business on September 1 of that year, with $20,000 of capital stock. The bank prospered and progressively grew, corresponding with the then-rapid growth and development of San Bernardino County. It became one of the most important and substantial financial institutions of Southern California. On January 1, 1884, Waters resigned and Harvey Drew succeeded him as president. On January 1, 1888, Morse stepped down from the position of cashier and S. F. Zombro took his place. Later that year, the bank quarters were moved slightly north from its previous location to the west side of North D Street between West 4th and West 5th Streets into a newly constructed building described as “Romanesque,” and considered to be the grandest structure in San Bernardino at that time.
According to the Lewis Publishing Company’s  An Illustrated History of Southern California: embracing the counties of San Diego, San Bernardino, Los Angeles and Orange, and the peninsula of lower California, published in 1890, “In 1888 the bank erected the elegant building it now occupies, which is one of the finest and most commodious banking houses on the Pacific Coast. It is a three-story structure, 45 x 110 feet, built of brick, with brownstone trimmings and massive, arched doorways of polished Slover Mountain marble. It was erected at a cost of $43,000, and the banking offices, which occupy the first floor, are models of convenience in arrangement and artistic beauty of finish. The best indications of the judicious management and steady growth of the business of the bank is furnished in the statements published January 1 of each year, and is here reproduced: January 1, 1883, capital paid up, $21,900; deposits, $152,725. January 1, 1884, capital paid up, $30,000; surplus fund, $8,797.72; deposits, $163,037.80, January 1, 1885, capital paid up, $50,000; surplus, $12,916.63; deposits, $147,796. January 1, 1886, capital paid in, $50,000; surplus, $10,-410; deposits $271,351.63; January 1, 1887, capital paid up, $50,000; reserve, $55,544.62; deposits, $357,000. January 1, 1888, capital paid up, $50,000; surplus, $87,047; deposits, $688,697. January 1, 1889, capital paid up, $50,000; surplus, $96,000; deposits, $328,587. July 1, 1889, capital paid up, $50,000; surplus, $110,000; deposits, $301,142.50.The shrinkage in the business showing in 1889 as compared with the previous year is due to two causes, namely: the depreciation in value and consequent depression in business resulting from the collapse in the speculative boom of 1887-’88, and the establishing of two new banks in San Bernardino.”
In 1886, the California Southern Railroad proposed to the City of San Bernardino locating the company’s division headquarters, together with a depot, machine shop and improvements valued at $200,000 there if the city would donate 18 acres of land adjoining the 20 acres already owned by the company. Drew was a leading proponent in having the city accept the offer. As a reward, Drew was made a director of the railroad company .That same year, Drew supported Fred Perris in getting the California Southern Railroad to build the line from San Diego Harbor to San Bernardino.
The East Redlands Water Company was organized in September 1886 to supply water from the Bear Valley Reservoir to a 450-acre tract in East Redlands. Drew was an original director of the water company.
Drew was an early stockholder in San Bernardino National Bank formed in 1887.
In 1888, Drew and John Andreson, a brewer who was a member of the San Bernardino County Board of Supervisors representing the Third District from 1877 to 1880 and representing the Fifth District from 1883 to 1885, built the post office block, starting at the corner of E and Court Streets.
On December 2, 1889, the Savings Bank of San Bernardino was organized by men interested in the Farmers’ Exchange Bank with a capital of $10,000. Frank Hinckley was elected president, Drew vice president, with S.F. Zombro the secretary and treasurer. The banks directors were Drew, John Andreson, Sr., James Fleming,  C. Kurtz and M. Byrne. 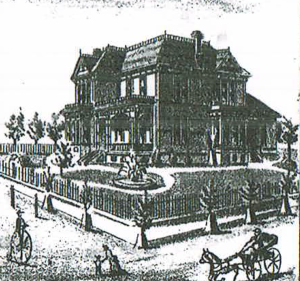 Harvey Drew lived with his family in this home at the corner of 4th and E Street in San Bernardino.

While the ventures Drew engaged in were generally successful, he suffered a few setbacks. In 1888 the Chino Valley Manufacturing Company with Robert D. Hunter, John K. Wolcott, Henry M. Ryan, H.L. Drew, Byron Waters and Richard Gird as directors was formed. Together, the directors proposed to erect extensive rolling mills, with the iron to be supplied from the he newly-discover beds at Daggett. The company started out well, with the intention of manufacturing steel on a massive scale. The Financial Collapse of 1889 caused the company to go under.
Drew also held an interest in the development of the citrus fruit industry. He owned a 240-acre ranch devoted to mostly orange groves and vineyards in what was then referred to as Old San Bernardino. In that venture, he was partnering with “some Pasadena gentlemen” as well as Charles Fairbanks, a Senator from Indiana who was later Theodore Roosevelt’s vice president.
The Mentone Company was formed in 1889 with H.L. Drew as president and N.K. Fairbanks as vice president. Drew and N.K. Fairbanks purchased 3,000 acres of land and laid out the Mentone town site. In 1891 they built the Mentone Hotel at a cost of $30,000. The hotel later was used as a sanitarium.
In 1893 the Southern California Southern Railroad, which was being absorbed by the Santa Fe Railroad, completed a line though the eastern San Bernardino Valley, with part of the track in the shape of a figure 8, which was called the Kite Route. It was intended to serve the transportation demands of the developing East Valley communities that included Highland, Mentone, Lugonia, and Redlands as a connection with the Los Angeles area and its harbor. In addition to hauling freight, the line was to provide passenger service. Among the properties bordering the Kite Route was Drew’s 240-acre ranch north of Redlands Boulevard and west of Calfifornia Street. Portions of that ranch had been subdivided into one-acre lots in 1889 and those lots were being offered for sale by James. W. Waters, Jr.
An Illustrated History of Southern California said of Drew, “Being an enterprising, public-spirited gentleman, he has taken great interest in the improvement of San Bernardino city and county.”
Indeed, in 1889, the state legislature passed a bill for the construction of an insane asylum in one of the five southern counties, appropriating $350,000 for the purchase of the site and the erection of the main building and the west and east wings, while calling upon the governor to appoint five trustees to select an architect to design the facility and another architect to supervise the construction.
After considering numerous options, the state settled on purchasing 360 acres of the Daley Tract in Highland with 60 inches of water from the North Fork Ditch for $114,000.  Governor R.W. Waterman selected as the undertaking’s trustees H.A. Palmer, H.L. Drew. E.F. Spence, John Andreson and M.A. Murphy. They employed Mssrs Curlett & Eisen of Los Angeles to draw the plans and specifications, and appointed T.H. Goff as superintendent of construction. Peter Crichton of San Francisco was deemed the lowest responsible bidder on the project. The building’s cornerstone was laid on December 15, 1890. The first building was completed in 1893, equipped with an electric plant, and a complete water and sewer system. It opened on August 1 of that year. It had as its first wards 100 patients brought from Northern California.  Dr. M.B. Campbell acted as the first superintendent of what is yet known as Patton State Hospital.
In 1891 an effort to secure a circulating library in San Bernardino began, led by C.C. Haskell, F.W. Richardson and J.W. Stephenson and others. In January 1892 a free library was opened in the residence of I.R. Brunn on Fourth Street with Miss Ella Lawson as librarian. The first library board was appointed on November 3, 1891 with J.W. Stephenson, chairman and C.C Haskell, Mrs. Henry Goodcel,  H.L. Drew and John Andreson as members.
In 1887 what was the original San Bernardino Board of Trade was established. Buffeted by the Collapse of 1889 and even before the Panic of 1893, it had passed out of existence. At the end of the 19th Century, the concept was revived and representatives of the business community reorganized the body in 1900, electing J.B. Gill president, John Andreson, Sr. vice president, F.D. Keller secretary, C. Cohn treasurer and Thomas Hadden, James Fleming, J.W. Curtis, H.D. Drew and Joseph Jonas to the board of directors. “Committee were appointed and the board at once became an active factor in the advancement of the industrial and commercial interests in the vicinity,” according to Luther A. Ingersoll’s Century Annals of San Bernardino County, published in 1904. “It took an active part in securing the Salt Lake Road for San Bernardino, and has been largely instrumental in pushing street improvements, the new water system and in securing a revision of the city charter.”
In early June 1901, Drew contracted a cold, which by the next week had devolved into pneumonia, possibly it was believed, because of the damage his lungs had sustained and never fully recovered from nearly 30 years previously when he had battled the  Great Michigan Forest Fire of 1871. On June 11, 1901, Harvey Linford Drew passed into eternity. Four of his six children – Arthur, Fred, Roy and Walter –  survived him.  He is buried in San Bernardino’s Pioneer Memorial Cemetery.