William Lindenberg was a German immigrant to America who made his way across the continent, at last settling in Redlands. It was there where, according to a historian John Steven McGroarty, “As a result of his labors land that was covered with greasewood and sagebrush was converted into orange groves, fruit orchards and beautiful drives.”
Born in Hildesheim, Germany on January 21, 1845,  Lindenberg was educated there and attending the gymnasium when at the age of fourteen he was obliged to end formal classroom study by what McGroarty called “a combination of circumstances.” McGroarty reports, nonetheless that Lindenberg yet “through subsequent reading, travel and observation …secured a good practical education.” 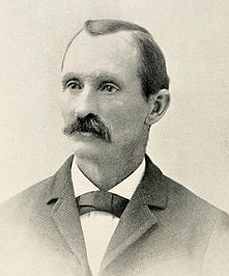 In 1864, when he was 19, he left Germany via steamer from Hamburg, crossing the Atlantic. He made his way to Missouri and in St. Louis met up with one of his older brothers, Frederick Lindenberg.
On February 6, 1873, Lindenberg, yet living in Missouri, married Elvira McCullough, and the couple had three children: Christine, Henry and Beatrice.
William spent a dozen years in America before sojourning to California. In 1876 he arrived in Los Angeles, where he lived for about a year.  He moved to San Bernardino, where he farmed. In 1880, he had enough money to purchase twenty acres in the  Lugonia District in Redlands. He grew deciduous fruit on a portion of the land, planting oranges on the remainder.
His operation grew over the following decades.
“Many of the orange groves in this productive section were set out by Mr. Lindenberg, who was also a reconstructionist, purchasing groves which had been neglected, and through constant care transformed them into productive properties, which he later sold to advantage,” according to McGroarty, the author of California of the South Vol. II, published in 1933 by Clarke Publishing of Chicago, Los Angeles and Indianapolis.
Lindberg oversaw the planting and cultivation of a 100-acre tract on San Bernardino Avenue. He later left the “flourishing groves on the Lugonia Ranch” to others and relocated his own personal operation to the Williams Tract, where he set out a huge grove and built a residence, where he lived for ten years.
Lindenberg’s daughter Christine, was a graduate of the high school in Redlands and an accomplished musician. His son Henry died at the age of eighteen.  Beatrice also attended local schools.
Lindenberg was a Congregationalist in religious belief and with his family attended the Congregational Church. His wife was also a pioneer member of the Holiness Church  and a member, with her daughters, of the Woman’s Club of Redlands.
Christine Lindenberg was a director of the Redlands Community Music Association and of the board overseeing the outdoor entertainment bowl at Redlands, where concerts by notable musicians from around the country were put on.
Further wanderlust prompted Lindenberg to leave the residence on the Williams Tract after he purchased a lot on the Terrace, the then-exclusive residential district of Redlands, where in 1903 he built an even grander home at 12 Terrace Avenue. “In this dwelling, set in the midst of beautiful grounds, he resided until his death on December 13, 1913,” according to McGroarty.
Lindenberg’s death came after he had been a resident of Southern California for 37 years and a year before the advent of what was then called the Great War and referred to by subsequent generations as World War I, in which Lindenberg’s adopted country, the United States, went to war against his native country, Germany.
“Mr. Lindenberg was a pioneer orange grower in his district and a recognized authority on matters relative to the production of citrus fruits,” according to McGroarty. “He not only developed, but he saved from extinction many groves. His advice was always followed and it was freely given, benefiting the new growers and those of long experience.”
McGroarty noted that it was said of Lindenberg that “When he passed away the community lost one of its best citizens, one who had from the first a vital interest in its material growth and adornment, one who sought to maintain the high character of its citizenship and who left visible monuments of his love for the beautiful in which the esthetic and the practical were so deftly blended…
“It was not alone as a grower that Mr. Lindenberg will be long remembered by the generation which was his in the city of his adoption, for he was one of the most public-spirited citizens Redlands has ever known,” McGroarty, apparently reproducing the words spoken during Lindenberg’s funeral elegy, wrote. “In the early days level headed, broad-minded men were needed, men who had the vision to see what the future held, if they were only wise enough and courageous enough to grasp the opportunity. He was consulted on many of the early problems of the city and his advice was accepted always, the result being success in all such undertakings. His honest, upright principles and charities made him early known as a worthwhile citizen, and in his long life he stood out as one of Redlands’ most dependable, reliable and prominent men. He is today cited as an example of what a man may become if he is blessed with the perseverance, intellect, moral courage and hearty will possessed by Mr. Lindenberg, but unfortunately, such men are rare.  He passed into eternity loved by his family and friends, respected and honored by the city he had served so long, so freely and so well.”