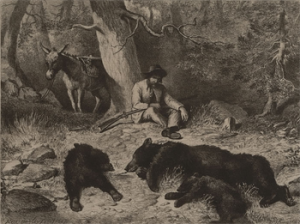 Well within its history as a political entity, which initiated in 1853, San Bernardino County was host to grizzly bears. The large and fierce creatures are no longer a local phenomenon, with the last in this neck of the woods having been killed in the late 1880s or early 1890s. Nevertheless, biologists maintain that the California Grizzly, once scientifically referred to as Ursus horribilis, at one time had a population within the entire state that ranged to as high as 10,000. A fair number of those resided in the San Bernardino and San Gabriel Mountains, and were present as well in the lowlands, though likely in lesser numbers.
That they proliferated in the San Bernardino Mountains is attested to by the names given to Bear Valley and Big Bear Lake by Benjamin D. Wilson in 1845, when, during an expedition into that marshy area at an approximate elevation of 6,700 feet, he encountered several of the creatures, and the men with his party bagged 11 of them, retaining the pelts.
In Southern California, grizzlies lived along the coast, near rivers, and in chaparral. Biologists say they would avoid entirely, or at least were far less fond of, the deserts and the coniferous forests associated with black bears today.
Opportunistic feeders, the grizzlies would eat whatever was available, including berries and roots, ground squirrels and fish. They were adept at digging in search of gophers, weasels, and other subterranean rodents. They did not seek out large prey, but would, if the circumstance presented them with the occasion, chase mountain lions and other smaller predators away from their kills.
Grizzlies were essentially indigenous to Southern California, having come into the area around 12,000 years ago along with a host of large mammals from north of the continent’s ice sheet such as bison, elk, moose, wolf, and humans.
For millennia, grizzlies coexisted with native Californians. The Indians were wary of the animals, which grew aggressive when startled or provoked, and proved dangerous because of their ferocity and willingness to kill humans to protect their territory and young. There is evidence that local Indians used brushfires to clear the landscape of places where bears could hide. Native Californians, however, did not engage in wholesale slaughter of the powerful animals, which could stand as tall as 9 feet and weigh from 400 to 750 pounds. Local bear populations remained stable for centuries.
The eighteenth-century arrival of Europeans upset that equilibrium. Grazing cattle and sheep destroyed the region’s native prairies and thus many of the bear’s natural food sources, but they also represented easily obtainable meat. Grizzly populations for a time boomed where livestock ranged. Ultimately, however, the newcomers brought doom for the grizzly as they expanded into areas in proximity to the bears. Ranchers, miners, and farmers all saw the bear as a menace, particularly when venturing into previously unsettled areas. Grizzlies do not usually antagonize humans but will more than stand their ground.
While unarmed humans could find themselves at the mercy of a grizzly bear, the predominant hostility in the long haul went the other way. Beginning with the Spanish settlers in California, the bears were hunted for sport or were captured and then put in rings with their hind legs staked to the ground, so that bulls could be sent charging in at them. A typical bear would vanquish a half dozen bulls before succumbing to a repetition of gore wounds. Eventually the object of most human-bear encounters became extermination.
In 1859 while in Los Angeles, William Holcomb and a companion, Jack Martin, heard of the Bear Valley diggings in the San Bernardino Mountains. They set out to make a try at working claims there. Forcing their horses through deep snow to get to the diggings, they reached Bear Valley, which had been dubbed “Starvation Flatts” by its discouraged group of miners, who were finding little. Like the others, Holcomb suffered from the lack of supplies and minimal gold finds in the rural mountain community. Called “the best sharpshooter west of the Mississippi,” Holcomb was asked by the miners to shoot some of the grizzly bears living in the area for their meat. Holcomb was able to bring back dead bears to feed the starving miners. He was nicknamed “Grizzly Bill” because he was known to have killed many bears. Over the next 30 years, he was said to have finished off all the bears in Bear Valley.
Ludwig Salvator, an Austrian prince who traveled through Southern California in 1876, was highly impressed by the region’s native flora and fauna. He wrote of the grizzly: “In the habit of roving at night, [the grizzly] goes out after swine as well as many kinds of roots, fruits, and vegetables. Owing to the zealousness of hunters who wage constant warfare on this troublesome neighbor, he is daily growing rarer.”
Their numbers being decimated, whatever bears who had become acclimated to the flat lowlands retreated to the chaparral-covered hillsides. By the 1890s they were unheard of in the flatlands and extremely rare in the most inaccessible of places. A large male bear, later named Monarch, was captured in Los Angeles County in 1889, and the last known specimen in the San Gabriel Mountains was shot on May 16, 1894. In 1908, the last wild grizzly bear in Southern California was killed by a retired game warden in Trabuco Canyon in Orange County.
A quarter of a century later, the state Fish and Game service introduced the Yosemite black bears to Southern California in 1933.