21 U.S. Female Veterans Have Traded Their Military Garb To Pose In A Popular Fundraiser Calendar Photographed In The Inland Empire 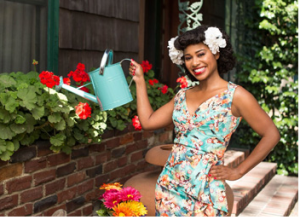 combat boots and uniforms to become 1940s-style calendar girls in the twelfth annual Pin-Ups For Vets fundraiser calendar, which was released in August. From

an ammo specialist to a military vehicle operator, to a gunners’ mate, to an intel officer, to a surgery technician on the front lines, to a weapons instructor, these female veterans have collectively served a total of 145 years in the Army, Navy, Marine Corps, Air Force, and Coast Guard. 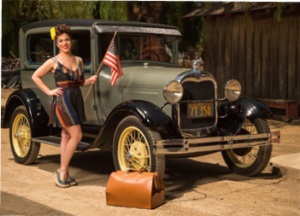 Decked out in retro hairdos and vintage fashions, these female veterans are making volunteering glamorous, as they visit VA hospitals across the country on their “50-State VA Hospital Tour” to boost morale and to deliver the pin-up calendars as gifts of

appreciation to their fellow veterans. These ladies are enthusiastically embracing their femininity, post military service. The veteran patients often tell them, “When you are here, my pain is gone!”
Pin-Ups For Vets has donated over $56,000 to help VA Hospitals purchase new therapy 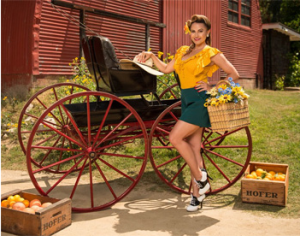 equipment and to provide financial assistance for Veterans’ healthcare program expansion across the United States.
Pin-Ups For Vets  2018 calendar model

and Army Veteran, Michelle Rivera, who served 7 years,  says, “I wanted to be a part of the calendar because it’s important for me to find ways to give back to other vets, especially those that went before me.  I’m a proud third generation Army veteran.  I love what Pin-Ups for Vets does, particularly for hospitalized vets, beyond raising money for medical equipment or services. 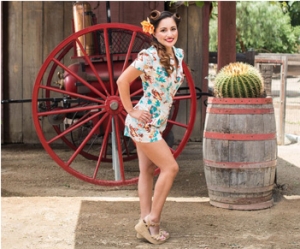 Pin-Ups For Vets lifts these Vets’ spirits, and there’s no dollar amount that can buy that!  I also love that female Veterans are part of the calendar, giving us an opportunity to show people another side of women veterans.”
This year, a milestone for the Pin-Ups For Vets Ambassadors will be delivering a calendar to the 12,000th veteran 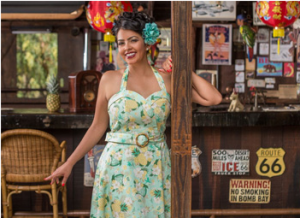 veterans with makeovers and clothing, and boosts morale for deployed troops through delivery of care packages.
The 2018 calendars are $15. They are available for purchase at PinUpsForVets.com or by check to to: Pin-Ups For Vets, PO Box 33, Claremont, CA 91711.
The Veterans Health Administration is the component of the United States Department of Veterans Affairs (VA) led by the

Under Secretary of Veterans Affairs for Health that implements the medical assistance program of the VA through the administration and operation of numerous VA hospitals, VA medical centers, outpatient clinics, community-based outpatient clinics.
The VA has experienced an increase in demand on its health system and provision of services to veterans in recent decades and in particular the last several years. Of the nearly 250,000 veterans involved in overseas conflicts between 2001 and 2016, 44 percent 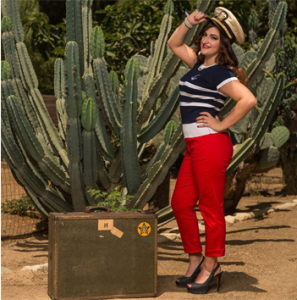 of those, primarily Iraq and Afghanistan war veterans, utilized services offered by the VA medical system. That contrasts with the 10 percent usage rate of the VA by Vietnam veterans. There has been a considerable uptick in treatment demand as a

consequence of the enemy’s use of improvised explosive devices, as well as the increased sensitivity to the realities and actuality of post traumatic stress syndrome, along with the techniques to diagnose it.
The VA and VA medical centers prioritize providing treatment to veterans with service-connected disabilities, veterans determined to be unemployable due to service-connected conditions, veterans who are former prisoners of war, veterans awarded the Purple Heart Medal, veterans awarded the Medal of Honor, veterans whose discharge was for a 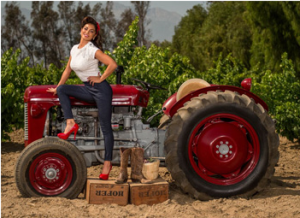 disability incurred or aggravated in the line of duty, veterans in need of vocational rehabilitation because their service resulted in injury or trauma that entailed the loss of their previous skill set or professional capability, veterans who have been rendered permanently housebound because of their service, and veterans exposed to chemicals

or to ionizing radiation.
Pinups, while existing for decades, came into tremendous vogue during World War II among American soldiers, sailors, airmen and Marines as a consequence of their being stationed at remote locations far from the home front. Consisting of drawings, paintings, and other illustrations as well as photographs featuring glamour models, fashion models, or actresses often in provocative or suggestive poses were mass produced in magazines, calendars and posters. After the war effort was well under way, nine million copies of magazines containing the art of a single pin up artist who was universally deemed particularly skilled at his craft, Alberto Vargas, were produced without adverts and sent free of charge to American troops stationed overseas and in domestic bases as morale boosters.
Pin-Ups For Vets has received Congressional recognition, and has been honored by the California Senate, California Assembly, Los Angeles County Board of Supervisors, Los Angeles Business Journal, California Jaycees Foundation and Junior Chamber of Commerce and National Association of Women Business Owners. There have also been nine flags flown above military bases and on missions in Iraq and Afghanistan in honor of the work Pin-Ups For Vets has done for the military and veteran community.
The 2018 Pin-Ups For Vets Fundraiser Calendar was photographed at the historic Hofer Ranch in Ontario.
Pin-Ups For Vets’ first donation went to the Loma Linda VA Hospital.
According to Pin-Ups For Vets founder Gina Elise, “We love to photograph here in the Inland Empire.”
Elise grew up in San Bernardino County and graduated from Rim of the World High School and also took classes at Cal State University San Bernardino before graduating from UCLA. The 2018 version of the calendar can be purchased at: PinUpsForVets.com