By Amanda Frye
Nan Songer, a self-taught naturalist, played a once well-hidden but pivotal role in the American victory in WWII. 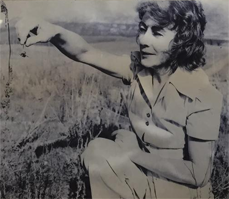 Nan Songer displays one of the creatures which fascinated her as a child and which became her life’s work and legacy.

Born Nannie Mae McCawley on May 26, 1892 in Cooksville, Tennessee to Joey Harris and Sarah Lula Hix McCawley, she was frail as a child and led a sheltered life. While she was very young she became interested in insects and arachnids, observing them in her home’s garden, where she would sit for extended periods in the sun. In high school, she studied botany and biology under the tutelage of Marie M. Meislawn.
Her brother Ridley had contracted tuberculosis and the family moved to Texas and Golden, Colorado in an effort to help with his recovery. After her family moved to Redlands, she was awarded an art scholarship to the University of Redlands in 1920, although she did not graduate from that institution.
On November 23, 1923, she married William A. “Bill” Nelson, with whom she would have two children, Elizabeth Louise “Betty Lou” on March 10, 1924 and William Donald “Billie Don” on September 23, 1925. In 1926, she lost both of her parents to influenza. She and Bill divorced sometime around 1930.
Nan subsequently met Noah H. “Bill” Songer, and they married on August 5, 1934. Songer was two decades older than she. He was devoted to her.
They resided on the North Bench on a three acre ranch at Juniper and Adams, and had a mailing address of Route 1, Box 120 Yucaipa. 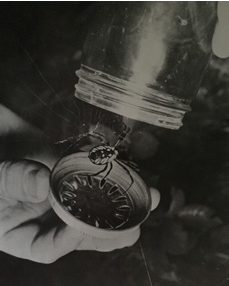 It was at that ranch in northwest Yucaipa that Nan was able to indulge her childhood passion to become an active naturalist. Black widows were her favorite.

With World War II nearing, the U.S. military had a need for material to provide the 1/10,000th of an inch crosshairs in the bombsites of the Army Air Corps’, the Navy’s and the Marines’ planes. Someone at the U.S. Bureau of Standards had heard of Nan and her highly specialized operation. In short order it was determined that the spider webs that proliferated in abundance at Nan’s spider farm fit the bill for the markings needed in the highly classified bombsights that in time some 100,000 bombers and fighter aircraft would be outfitted with. Nan’s unique talent to capture the tiny spider silk threads spun by her captive spiders at once became a highly prized military asset. Seemingly without missing a stroke, her farm was able to produce in mass an unlikely commodity – spider silk – that had become essential to the war effort. 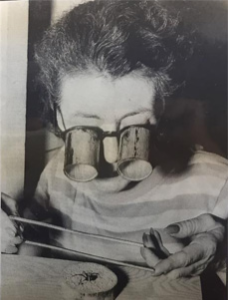 While the bombsights were highly classified and there was a degree of secrecy about them, by 1943, reporters with various newspapers all around the country were publishing stories about Nan Songer, who became known as the “Spider Woman.” The exact location of her spider farm was kept confidential, as between 1940 and 1946, the Songer Ranch’s address was omitted from the Yucaipa phone book.