Students from California Baptist University will soon be welcome at San Bernardino County’s detention centers.
At the recommendation of San Bernardino County Sheriff John McMahon, the board of supervisors this week approved a non-financial agreement with California Baptist University to allow students working on their master’s degree in social work to do their internships at the county’s detention centers beginning on October 1, 2017 and running through September 30, 2020.
According to sheriff’s captain Robert O’Brine, “This agreement provides for cooperation between the sheriff’s department, through its inmate services unit, and California Baptist University. Under the terms of the recommended agreement, the department will provide students currently enrolled in the master of social work program at California Baptist University with supervision, training and field experience in education programs, including trauma recovery and family relations, health and nutrition, marriage and family support services, and social work provided to clients (inmates) at the county’s detention centers.
The inmate services unit is required by Title 15 California Code of Regulations to provide adult education programming to inmates housed in all four county detention facilities. Master of social work students will assist inmate services unit staff to provide these services to the families and inmates. The goal of the agreement is to provide master of social work students, with supervised practicum placement at a detention facility for the purpose of assisting with inmate rehabilitation and successful reentry. The training and field experience will augment the master of social work students’ classroom learning in preparation for professional social work practice. The sheriff’s department will have the benefit of master of social work students working with inmate services unit staff as additional support to provide both male and female inmates with classes, interactive counseling sessions, and one-on-one support in an effort to reduce the cycle of trauma and incarceration.”
This policy and Title 15 California Code of Regulations, which has been updated several times since 1982, very likely has Frank Bland, the longest serving sheriff in San Bernardino County history, spinning in his grave. Bland was elected sheriff in 1954 and remained in office seven terms – 28 years – until January 1983.
Bland did not believe in mollycoddling criminals. Reports are that his current successor, McMahon, considers himself a Christian. Bland personally professed disdain for those he considered “bleeding heart liberals” who cloaked the lenient treatment of those incarcerated in his jails in religious rhetoric. He said there was “no place for Christian charity in our jails.”
In November 1970, the San Bernardino County Grand Jury released a report that expressed disapproval of the physical abuse of prisoners in the county’s detention facilities and the practice of housing prisoners deemed to be disrespectful or uncooperative with their jailers in what was referred to as “the hole,” i.e., in isolation, a dank and unlighted set of chambers.
Bland had an immediate, and predictably negative, reaction to the criticism. “The grand jury just doesn’t know what it’s talking about,” he told the board of supervisors.
In private conversations with those he considered to be right-thinking and sensible who had the proper respect for law enforcement, Bland expressed himself somewhat differently, acknowledging that jails were unpleasant places and that the experience of jail and prison was intended to make a lasting impression on those consigned to them. Whatever experience those in jail underwent, Bland maintained, was a consequence of their own criminal acts. 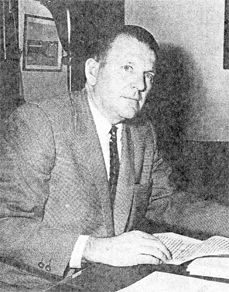 Within a short span of time, his department produced a written response to the grand jury report that was intended to mollify his department’s critics. “The report is an incredible collection of half truths and misstatements,” Bland said. “It was obviously prepared by people who, out of idealism, inexperience, and ignorance, have not obtained all the facts.”
Bland dismissed suggestions that those jailed were subjected to mistreatment, by either their keepers or other inmates. “Inmates classified to serve their time in maximum security are considered to be escape risks due to their past history of escaping, or the fact that they are facing a major prosecution in this county or elsewhere, due to the fact that they are addicted to the use of narcotics or dangerous drugs and will go to every means to sustain their habit, or they are homosexuals and must be isolated from the other inmates for their own protection and to prevent the occurrence of criminal sex acts.”
Nevertheless, evidence of Bland’s contempt for efforts to interfere with his employment of a harsh incarceration regime crept into the response, with an assertion that his approach was one that found favor with the public at large.
“The people throughout the United States are extremely dissatisfied with the present judicial system thinking only of the rights of the defendant and failing to consider the protection of society against the criminals,” Bland asserted.
Less than a year later, Judges John Lawrence and Roy Chapman threw the weight of their gravitas and authority, albeit quietly at first, behind those who felt Bland was misguided in his belief that the conditions of incarceration should be onerous and used for instilling a life lesson in those entrusted to his custody that the wages of crime are assured misery. Lawrence and Chapman provided the grand jury with information indicating that prisoners, young prisoners in particular, had been subject to sexual abuse while in the custody of the sheriff’s department, and that the sodomizing of prisoners in San Bernardino County’s jails was a recurrent reality. Lawrence and Chapman’s action had taken place on the down low and outside the view of the public. In early October 1971, however, the matter turned it into a public issue when Lawrence reduced sentences for two 18-year-old offenders to five days to be served in a rehabilitation center in lieu of sending them to jail where he said they could be subjected to homosexual attack. Bland went ballistic, calling for the removal of Lawrence unless the judge could provide evidence to support his assertion about homosexual rape taking place in the county’s jails. Lawrence, Bland told the board of supervisors, was justifying his propensity for sentencing leniency “by saying the jails are unsafe for criminals. All young people placed in the county jails are kept separate from known homosexuals or hardened criminals.”
Bland, comfortable in the knowledge that then-San Bernardino County District Attorney Lowell Lathrop had his back and his status as county sheriff afforded him virtual invulnerability, rode out the storm, and was able to remain in office another 11 years.
For at least some historians, sociologists and criminologists, it might be illuminating to know what Bland would have to say about the concessions McMahon has made to the standards being applied with regard to the warehousing of society’s criminal element now, some two generations after Bland was the unchallenged ruler of San Bernardino County’s law enforcement fiefdom. That size-up is not available, as Bland died in 1986. –Mark Gutglueck