The Bullock’s oriole, which is known by the scientific name Icterus bullockii, was once commonly confused with and considered indistinguishable from the Baltimore oriole. A small New World blackbird, it derives its name from William Bullock, an amateur English naturalist.
Bullock’s orioles are gender dimorphic, with males being more brightly colored and slightly larger and heavier than females. In general, adults range in weight from 29 to 43 grams or 1 to 1.5 ounces. Adults have a pointed bill with a straight upper beak ridge. In adult males, the tail is long, square, and jet black. All exposed skin is black, as are the claws and bill, though the base of the lower mandible lightens to bluish-gray. 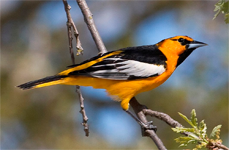 Adult males are characterized by strongly contrasting orange and black plumage, a black throat patch and a white wing bar. The underparts, breast, and face are orange or yellow; by contrast, the back, wings, and tail are black. A black line extends from each eye to the black crown. The feathers not directly used in flight, known as wing coverts, are fringed white, forming a wing patch. Although the tail is mostly black, the outermost three or four flight feathers, known as retrices, are tipped orange, forming a T shape. Adult females, by contrast, have gray-brown upperparts, duller yellow on the breast and underparts, and an olive crown. Some females may also have a dark throat patch, similar but less extensive to that common in adult males. In all cases females lack the black eye-line present in adult males. It is generally believed females’ throat patches become prominent with age.
Following the general pattern observed among icterids, the overall plumage pattern seen in immature male Bullock’s orioles closely resembles that seen in adult females. Juveniles resemble adult females but have darker wings, fresh wing coverts, and a pink or whitish bill. Sexual dimorphism is not obvious in juveniles. 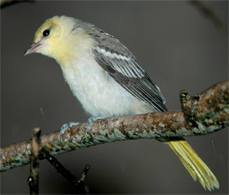 These birds engage in strong direct flight with rapid wing beats.
Bullock’s orioles are seasonally monogamous. The breeding season typically lasts from May until July. Breeding tends to begin later in the northernmost and westernmost portions of its geographic range. Mated pairs of Bullock’s orioles cooperate to weave deep, pendant baskets in which are deposited between three and six eggs, though females tend to do much of the work. The nest is woven of plant fibers, primarily bark and fine grass fiber, though animal hair is also commonly used. The nest is lined with down, hair, and moss.
Both males and females rear the young and defend the nest from predators and nest parasites.
Bullock’s orioles and Baltimore orioles typically hybridize in the Midwest where their geographic ranges overlap.
The Bullock Oriole’s call consists of a short rattle, given by both males and females, along with a sweet but faint kleek, or pheew. Both males and females sing. While males have a sweeter voice, females tend to be more prolific singers. Songs tend to be a musical, lively series of whistles ending in a sweeter note: kip, kit-tick, kit-tick, whew, wheet.
Bullock’s orioles are native to western North America, though they are sometimes found as vagrants in the eastern half of the continent. During the breeding season, they are found as far west as the eastern foothills of the Cascade Range. Their breeding range stretches east to the Dakotas, Kansas, and northern central Texas. This species can be found as far north as British Columbia in Canada and as far south as Sonora or Durango in Mexico. It is common throughout its range, but is absent in parts of Arizona and Idaho where a combination of extreme elevation and an arid climate make for poor living conditions. During winter, this species retreats to Mexico and northern Central America. Its winter range extends south and east from Sinaloa to Oaxaca.
Like other members of Icteridae, Bullock’s orioles prefer habitat edges. They especially prefer riparian corridors, open deciduous woodland, and scrub forest.California Black Oak is a preferred foraging substrate for many birds.
Observations during the breeding season indicate that members of this species prefer areas with an abundance of cottonwood, pecan, and (if near water) willow. In dry areas, this species prefers salt cedar and mesquite. In California, eucalyptus trees are used as major sources of nectar.
These birds forage in trees and shrubs, also making short flights to catch insects. They mainly eat insects, caterpillars, fruit, berries, and nectar. Other fruits eaten include oranges and sometimes grapes. In some locations, they may be seen using hummingbird feeders.
These birds will readily come to a dish filled with grape jelly left out for them by humans. Their parents lead the fledglings, feed them jelly and then the adult males leave the area. The young stay at the jelly dish from first feeding in early July and leave late September.
A member of the northern oriole group, Bullock’s orioles were once considered to be conspecific with Baltimore orioles and black-backed orioles. However, recent phylogenetic data suggest that Bullock’s orioles are members of a distinct species that does not share a most-recent common ancestor with Baltimore orioles, as was once assumed.
From Wikipedia, National Geographic and Whatbird.com