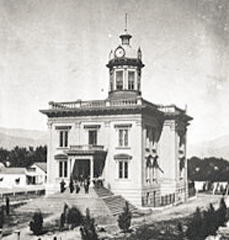 In the 1850s and 1860s, justice was dispensed in San Bernardino County in forums that were sometimes impromptu and as often informal That changed in 1874, when San Bernardino established its first permanent courthouse, a two-story structure seen above. 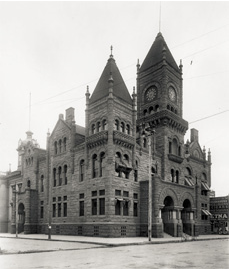 A second courthouse replaced the original structure in 1892. It was built at the corner of Court and “E” Street. This courthouse. was demolished in 1928 after the third courthouse was established in 1927 along the extended Court Street at 351 North Arrowhead Avenue.
The decision to locate this courthouse in San Bernardino triggered a political war in the early 1890s when a faction of county leaders wanted to have it built in Riverside. As a consequence, what is now Riverside County seceded from San Bernardino County in 1893.