In May, the San Bernardino County District Attorney’s Office’s Public Integrity Unit began an investigation into Upland City Councilwoman Janice Elliott’s allegations that the city council engaged in Brown Acts violations. The Ralph M. Brown is California’s open public meeting law which requires that all official business of a governmental entity take place in public, with five exceptions – discussion relating to potential or ongoing lawsuits, real estate transactions, contract negotiations, employee discipline or firing, and employee public union collective bargaining. Elliott told the San Bernardino County District Attorney’s Office that on at least two occasions the members of the Upland City Council held a closed door meeting outside the scrutiny of the public where they engaged in a discussion of an issue or issues that the Brown Act prohibits them from discussing. Information about that investigation began to circulate by June and early last month others came forward with further information relating to the Upland City Council, in particular its newest member, Sid Robinson, some of which pertained to his relationship to Steve Lambert, who through his company, the 20/20 Network, has a contract with the City of Upland to provide public relations, communication, strategy formulation and crisis management services. Robinson, a public relations specialist himself with expertise in strategic communications, was a part of the 20/20 Network. Moreover, Lambert had been in attendance at two of the closed door meetings at which Elliott said the Brown Act violations occurred. Subsequent to Elliott’s May complaint to the district attorney’s office, as the resultant investigation was running its course, the Upland City Council acted to remove Elliott from her three most prestigious adjunct committee assignments, a move widely perceived as retaliation against her for having launched the Brown Act violation complaint. That move did not escape the attention of the investigators in the district attorneys office, who in short order dug up or were provided with documentation of the earlier referenced information pertaining to Robinson and the 20/20 Network. Contained in those materials was indication of a nexus between the circumstance involving Robinson, who from the outset of his time on the council routinely voted to approve the city’s payments to the 20/20 Network.
In its July 21 edition, after contacting Robinson for his version of events, the Sentinel reported on the ongoing investigation. Mentioned in that report were the city council, including Robinson and Elliott; city manager Martin Thouvenell; city attorney James Markman; assistant city manager/city clerk Jeannette Vagnozzi; the 20/20 Network, and Steve Lambert. 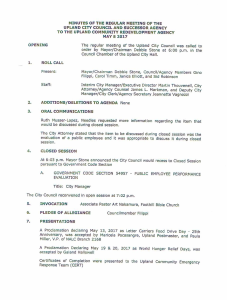 Above is the first page of Exhibit D, the minutes of the May 8, 2017 Upland City Council meeting. The minutes report that the city council went into a closed session at that meeting to discuss the performance of city manager Martin Thouvenell. Steve Lambert of the 20/20 Network attended that closed session of the city council. Lambert maintains that “it is not unusual – and not at all improper – for city staff and consultants to attend closed sessions to provide counsel and answer questions councilmembers might have.” District attorney’s office investigators, however, have taken an interest in the discussion that actually took place during that closed session. Councilwoman Janice Elliott told the district attorney’s office that the discussion during that meeting deviated from a strict review of city manager Martin Thouvenell’s performance and dealt with a protocol for the behavior of city council members. Subsequently, investigators unearthed a document dealing with just that subject entitled, “In House Policy of the Upland City Council,” which had been discussed by the council at that meeting and either signed or initialed by all of its members during the course of that meeting. A copy of that document was published by the Sentinel last week as Exhibit C. Investigators refer to Exhibit C as a “smoking gun,” which essentially establishes that the Brown Act violation which Elliott reported took place, and that the council’s discussions in closed session went beyond the subject matter which can be legally addressed in such forums – litigation involving the city, personnel issues, real estate transactions, contract negotiations and collective bargaining with unions representing city employees. Exhibit D, above, illustrates that city officials failed to disclose the full range of discussions that took place during the May 8 closed session of the council. No mention of any discussion relating to the behavioral protocol is mention in the minutes. Nor is there mention of Lambert being present during those discussions. These omissions from the official meeting minutes have taken on wider significance as the investigation into what was initially an inquiry into Brown Act violations by the city council has expanded.

In short order, Robinson, Thouvenell and Lambert took umbrage at the article; and each have demanded retractions. Robinson maintains the article “makes numerous misstatements and false claims, fails to offer any verification of its sensational allegations and is clearly designed to harm my reputation.” Robinson said the article “implied or provided knowingly untrue information about my relationship with the 20/20 Network.”
Thouvenell said the article contains “malicious and inaccurate statements.”
Lambert stated that journalistic coverage of the investigation is irresponsible, misleading, false, damaging to his company’s reputation, defamatory and libelous. He maintains the Sentinel’s reporting upon the investigation and the background behind it was done “all without corroboration” and “The entire piece and its presentation are wildly speculative and conspiratorial.” The article, which Lambert said employed attributions of “false and malicious allegations to unnamed ‘others,’ and couche[d] some of its more damning allegations with conditionals,” linked Robinson to the 20/20 Network, which Lambert said was “unsupported by facts” and was “a clear defamatory distortion of the truth.”
Lambert took further issue with the article’s description of the April 24 and May 8 closed sessions of the Upland City Council during which the Brown Act violations under investigation by the district attorney’s office occurred, stating that the article “wrongly characterizes my involvement in closed sessions as alleged violations of the Brown Act.”
Beginning last week the Sentinel published three of eleven exhibits contained in the district attorney’s office’s public integrity unit’s case file relating to the investigation of Sid Robinson that have been provided to the newspaper. The Sentinel this week is publishing another three of those exhibits. The Sentinel is doing so to assist its readership in assessing for itself whether the Sentinel’s reporting was “done without corroboration,” as Lambert put it and if, as Robinson said, whether the Sentinel has “fail[ed] to offer any verification of its sensational allegations.” These documents should also assist the Sentinel’s readership in ascertaining whether the Sentinel has mischaracterized the evidence, what issues were reported by the Upland city clerk and other city officials to have been discussed during the city council’s closed sessions, the degree to which the Sentinel engaged in “speculation” in undertaking its reporting of the investigation, as well as whether the Sentinel article in general and specific is loaded with “false and malicious allegations” which qualify, in Lambert’s words as “a clear defamatory distortion of the truth.” 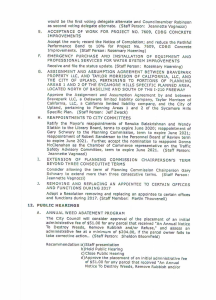 Above is the third page of Exhibit E, the agenda for the June 12 Upland City Council meeting. Item J pertains to “removing and replacing an appointee to certain office and functions during 2017.” Though she is not mentioned by name in the agenda, the official to be removed is city councilwoman Janice Elliott. The council’s action to replace her was an unusual one in that prestigious and honorific adjunct committee and board assignments are apportioned among and shared by municipal officials throughout California on what is basically an even basis. The concerted effort to remove Elliott from those assignments came roughly a month after she reported to the district attorney’s office that she believed her council colleagues were engaged in Brown Act violations.

While examining the individual investigative file exhibits separately or in installments of three may provide the casual reader with insufficient context upon which to make any type of judgment, the reader should be able to orient him or herself to the germane issues by finding a copy of the July 21 Sentinel and reading the article “Robinson Denies Upland’s Contract With His Affiliate Constitutes A Conflict” and the July 21 Sentinel which included Sid Robinson investigative file exhibits A, B and C, the minutes to the April 24, 2017 Upland City Council meeting, the agenda for the May 8, 2017 Upland City Council meeting and a document entitled In House Policies of the Upland City Council, which was discussed and signed by the Upland City Council members during the closed session of the May 8 meeting, respectively. All of these exhibits are illustrative of the substance that was at the basis of the original investigation into the Brown Act violations that ultimately, by extension, brought the circumstance involving councilman Sid Robinson and his relationship to the 20/20 Network into focus for the investigators. 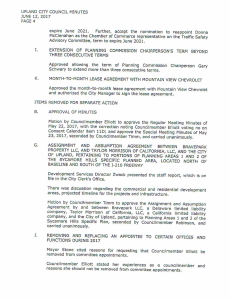 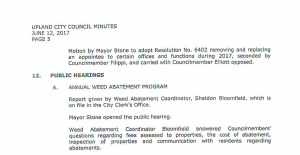 Above is page 4 and the top of page 5 of Exhibit F, the minutes of the June 12 Upland City Council meeting showing the council’s action with regard to Item J, by which councilwoman Janice Elliot was removed from three of the adjunct committee assignments she had been given shortly after she began to serve on the council. The council scheduled that action and then took it in the aftermath of Elliott approaching the San Bernardino County District Attorney’s Office with a complaint about what she perceived to be violations of the Brown Act, the State of California’s open public meeting law. While Brown Act violation complaints are relatively rare, they are not unheard of in the rough and tumble of politics, and in the normal course of things, the punishment meted out for such violations when they are proven to have occurred is usually very mild, most often a letter of admonishment to the offending parties. The Upland City Council’s harsh reaction against Elliott in the wake of the investigation galvanized the investigators, however, and they intensified their scrutiny of the Upland City Council as a result, leading to a wider investigation that included delving into Councilman Sid Robinson’s relationship with a city vendor, the 20/20 Network

Contained herein, on pages 6 and 7 are the relevant pages of exhibits D, E, and F, respectively, the minutes from the May 8 council meeting; the agenda for the June 12 meeting containing the agenda item to remove councilwoman Janice Elliott from three of her committee assignments; and the minutes of the June 12 meeting in which Elliott was in fact removed from those committee assignments.
Hereafter, the Sentinel will publish Exhibits G, H, I and J, respectively, Sid Robinson’s statements of economic interest showing his status as a “subcontractor” with the 20/20 Network; a narrative from Steve Lambert hailing Sid Robinson as having joined the 20/20 Network as one of its public relations professionals; the page from the minutes of the April 24 Upland City Council meeting in which Robinson was appointed by his council colleagues as the city’s representative to the Southern California Association of Governments; and a press release produced for the Southern California Association of Governments authored by Steve Lambert as part of the 20/20 Network’s contractual work for that entity.