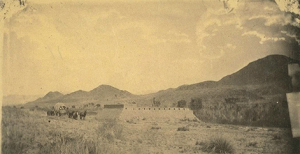 Taken with permission from MojaveDesert.net, a site devoted to history put together by Walter Feller. Reach him at 760 244-2353