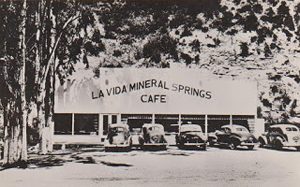 Though the development of modern civilization is fast encroaching upon it, Carbon Canyon for decades was a rural oasis lying between the suburban sprawl of Orange and San Bernardino counties. The easternmost portion of Carbon Canyon lies within the southwesternmost corner of San Bernardino County.
Carbon Canyon is so named because of the rich petroleum deposits beneath it. In 1893 an oil driller sunk a shaft, unexpectedly provoking an artesian fountain of bubbling warm waters. The site was dubbed the La Vida Hot Springs. Inquiries were made, and it was learned that the warm mud seeps there were considered a sacred spot among the Native Americans of the region who found immersing themselves into the mineral baths soothing. Shortly thereafter, a hotel was established on the 36 acres surrounding the springs.
Well off the beaten track, La Vida would become a hideaway for bootleggers who ran a speak-easy there during Prohibition.
By the 1930s, boxer Archie Rosenbaum had acquired the hotel and springs. With its two pools, the hotel and its accompanying cottages with private baths became a major weekend getaway for members of the Los Angeles Jewish community. Attesting to this were signs in Yiddish advertising the benefits of 110 degree mud baths.
The springs were at that point celebrated as a major local phenomenon and a local bottler set up an operation on the property where what was for a time a popular soda called Lime N’Lemon was produced.
La Vida Resort remained a popular attraction well into the 1960s but was fading by the end of that decade, and the hippies of that era would break into the hotel and cottages at night to smoke grass.
In 1974, a Japanese businessman, Leo Hayashi, bought the place, intending to rebuild it into a fashionable resort. That dream ended when in December 1988 a fire destroyed the premises.