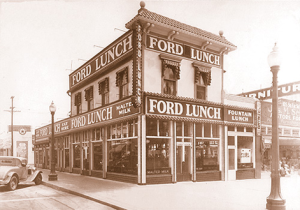 With the dawning of the automobile age, Ford Lunch established itself at the southeast corner of Holt Boulevard and Euclid Avenue, where by the 1920s it had become a favored midway stopping point for the movie stars and celebrities on their way to Palm Springs or Lake Arrowhead. In those days, it sat amongst a slew of Ontario enterprises along A Street, which was later named Holt Boulevard, serving travelers, including restaurants, motels, service stations, radiator shops and mechanics garages. Ford Lunch was also located within walking distance of the Ontario Hotpoint Works, where one of the earliest versions of the electric iron was produced. Ford lunch developed a degree of cachet with the residents of Ontario over the years, with its bright crystal chandelier attracting customers in the evening. One of its culinary features involved buttering the restaurant’s hamburger buns. It remained a fixture in Ontario into the late 1960s.