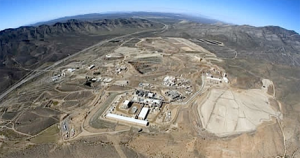 What would become the Mountain Pass Mine was discovered by a uranium prospector in 1949, when he noted high radioactivity in the area.
The Mountain Pass deposit is in a 1.4 billion year old Precambrian carbonatite intruded into gneiss, and contains 8% to 12% rare earth oxides, mostly contained in the mineral bastnäsite.
The Molybdenum Corporation of America bought the mining claims, and small-scale production began in 1952 on the south flank of the Clark Mountain Range and just north of the unincorporated community of Mountain Pass.
Production expanded greatly in the 1960s, when the mine was operated as an open-pit to supply demand for europium used in color television screens.
Between 1965 and 1995. the mine was the majority supplier of the world’s rare earth elements. See the front-page article in this edition of the Sentinel. reporting on the prospects of operations at the now-shuttered mine being reinitiated.