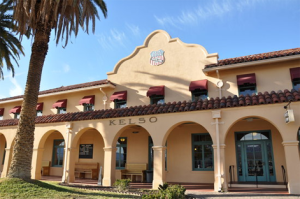 Kelso, not quite 35 miles southeast of Baker and 21.3 miles north of the Kelbaker Road Exit off I-40, which is 28 miles east of Ludlow, had its origin when the San Pedro, Los Angeles and Salt Lake Railroad built its line through the Mojave Desert in 1905. Since there was water available at 2,126 foot elevation Kelso at what is essentially the base of a long upgrade on the line to 4,190 foot Cima Summit, a station was established to supply water and connect helper engines which were hooked up to the eastbound trains to assist them in the ascent of the 18.8-mile long grade from Kelso to Cima. The town was apparently named after John H. Kelso, a railroad employee.
In 1920, L.J. Packard opened up a small, concrete general store, which he operated as both a store and post office until 1941.
Until 1923, the station at Kelso was quite modest. In 1923 a two-story depot building, erected in the grand Mexican Mission Revival architectural style, became the fourth of six such depots on the Union Pacific’s Los Angeles to Salt Lake City line. Its facilities included a ticket counter & telegraph office, station agent office, baggage room, waiting room and a restaurant on the first floor, a rooming house on the second floor and billiard and reading rooms in the basement. It reflected a rivalry with the Santa Fe Railroad and its famous Harvey House depots. Known as the Kelso Club, it functioned as a community center for Kelso.
During World War II, Kaiser’s Vulcan Iron Mine was active in the hills about nine miles southeast of town, resulting in a Kelso’s population rising to over 1,000. With the closure of the Vulcan Mine, the Union Pacific stopped using the depot in 1964. The depot was completely abandoned in 1985. The Union Pacific once intended to demolish the depot, but subsequently a fund was established to save the building, and with the support of the National Park Service, renovation began in 2002. The building reopened to the public in October 2005 and currently serves as a visitor center for the Mojave National Preserve.