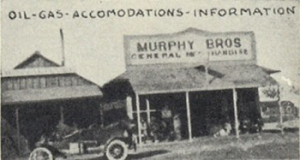 Ludlow was founded in 1882 as a water stop on the Atlantic and Pacific Railroad, which was later taken over by the Atchison, Topeka and Santa Fe Railroad in 1897. The town was named to honor rail car repairman William B. Ludlow.
When gold was discovered in the nearby Bagdad-Chase Mine in 1900, the town went into a boom. The first samples milled from the mine yielded about $17,000 per one thousand tons of ore. This prompted an upsurge in production. There was a lack of water at the mine to process the ore. Beginning in 1903, water was brought in on the Ludlow-Southern Railroad. When sufficient quantities of ore accumulated in Ludlow, the ore was transferred to the mill at Barstow.
Historian David Myrick (Railroads of Nevada and Eastern California) credits the Bagdad-Chase mine with producing, from 1880 to 1970, half of all the gold mined in San Bernardino County.
Because the company town next to the Bagdad-Chase Mine, known as Rochester and later as Steadman, was declared by its superintendent a “closed camp” at which women and liquor were prohibited, Ludlow became something of a hot spot, with miners flocking there on Saturday nights in search of diversion, entertainment and recreation. A class of entrepreneurs filled the void, boosting the local economy. Much of the town of Ludlow was owned by the Murphy Brothers. A savvy woman, who went by the name Mother Preston, purchased or had built several buildings, into which she located a store, hotel, boarding house, saloon, café, pool hall and three homes. She was known to be a good businesswoman and an expert poker player. After becoming wealthy, she sold out to the Murphy Brothers and retired to France.
When borax was discovered in the area, Francis Marion “Borax” Smith built a railroad which ran from Ludlow to Beatty, Nevada. The railroad, the Tonopah and Tidewater Railroad, was 169 miles long. Having three railroads running through Ludlow further boosted the town.
The Ludlow-Southern Railroad ceased operations in 1916,
In 1927-1928 the Pacific Coast Borax Company began shutting down operations, greatly curtailing the use of the T & T Railroad, which ceased operations in 1933. In 1943 the tracks had been pulled out. Ludlow had some continuing relevance because of Route 66, surviving and even thriving by meeting the needs of travelers on the National Old Trails Road, which had been converted to Route 66 in California in 1926, 1927 and 1928. Ludlow providing a Motor Court with bungalow cabins, the streamline moderne Ludlow Cafe, a gasoline-service garage, and shade. Several of these ventures remained in place through the late 1960s. After Interstate 40 was built, bypassing the town, there was little business and most residents departed, leaving a ghost town that features a shell of the Ludlow Mercantile Company (originally Mother Preston’s and then the Murphy Brothers), railroad tracks, a neglected and deteriorating cemetery, the old Ludlow Café and the ruins of empty buildings and Tamarisk trees that still stand flanking the old highway.