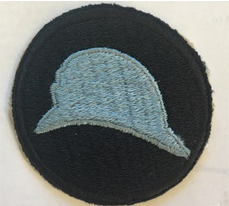 by Ruth Musser-Lopez
The 93rd U. S. Infantry Division was activated one hundred years ago in December 1917 and sent to France. The 93rd Infantry Division had the distinction of being an all “colored” segregated unit of the United States Army in World War I and World War II. It was known initially as the 93rd Division (Provisional). When it was fully formed, the unit became known as the 93rd Division (Colored).
During WWI, the troops never fought together as a division in France. Over the objections of the division’s commander, Brig. Gen. Roy Hoffman, its brigades were broken up and the regiments brigaded with French Army formations. Several of its units fought with the French Army during the Second Battle of the Marne where they were issued French equipment, helmets and arms but wore US uniforms; the “blue hat” nickname is derived from the blue-painted Casque Adrian helmets they wore.
Thereafter, though the blue helmets were not worn on their heads, those enlisted in this division wear a 93rd Infantry Division shoulder patch on their sleeves with an insignia depicting the blue French Adrian helmet. Each regiment was brigaded with French forces for three time periods: 1 to 21 July 1918; from 1 August 1918; and from 24 October 1918 to the armistice:
During tough combat in France during WWI the division acquired from the French the nickname Blue Hats.
The division was reactivated as infantry on May 15, 1942 at Fort Huachuca, Arizona. In late 1943, the 93rd Infantry Division moved westward to the California-Arizona Maneuver Area (CAMA). Mark Wetmore, 82, a veteran who served in Korea and France has lived in Needles off and on since 1936, recalls that the division was stationed at Camp Clipper, the divisional camp near Essex, approximately 49 miles west of Needles on Route 66, before departing overseas from the United States for the South Pacific Theater of Operations in January, 1944.
Camp Clipper (formerly Camp Essex) had been previously set up by General George S. Patton, Jr. as part of the California-Arizona Maneuver Area (CAMA) before he left with the First Battalion to North Africa in the Operation Torch campaign. Due to the success of Patton’s Battalion in Africa, the Army decided to continue the use of the California-Arizona Maneuver Area to train troops for warfare in other WWII theaters. Today, what remains of Camp Clipper are cleared camp areas and wide road corridors devoid of the surrounding creosote.
Wetmore recalls two United Service Organization facilities in Needles, he said, segregated for white and “colored” troops located on opposite sides of the tracks. The United Service Organization (USO) facilities were established as a nonprofit organization that provides programs, services and live entertainment to United States service members and their families. Another long time resident, Martin L. (“Mel”) Richardson, who will be 90 years old this June, recalls that when the troops would arrive in Needles on their leave, they would disembark from the train andthe white troops would be escorted to the USO, which was located where a parking lot now exists on the west end of the El Garces depot. The African American troops would march escorted to a separate segregated facility on the north side of the tracks towards the river along River Lane.
Wetmore also recalled that “members of the 93rd infantry, all colored, manned the fuel storage area by the underpass” near the USO. He said vehicles were gassed up there and that “jerry cans” would be refilled or replaced with full cans of fuel. “The operation was heavily guarded.”
In 1944 the 93rd Division left the Needles training maneuver area and then served in the Pacific theater at Wake Island, New Guinea and Bougainville in the Solomons from 1944 to 1945, after which the division served in the Philippines until 1946. Most of the division did see service in the Pacific Theater during World War II, but the division’s regiments were mainly utilized as construction units and in defensive operations. In 1945, the 93rd Infantry Division was inactivated, though the lineage of several of its units are carried on by the Illinois and Maryland Army National Guard.
The 93rd was known initially as the 93rd Division (Provisional). When it was fully formed, the unit became known as the 93rd Division (Colored) and was composed of the following regiments:
• 185th Brigade (Infantry)
• 369th Infantry Regiment (“The Harlem Hellfighters,” formerly the 15th Infantry Regiment, New York National Guard and now the 719th Transportation Company, 369th Sustainment Brigade.)
• 370th Infantry Regiment (“The Black Devils”; formerly the 8th Infantry Regiment, Illinois National Guard). Awarded the Fourragère. Now lineage is carried on by the 1st Battalion, 178th Infantry, Illinois National Guard.
• 186th Brigade (Infantry)
• 371st Infantry Regiment (1st Provisional (Colored) Infantry Regiment, National Army was drawn from black draftees)
• 372nd Infantry Regiment (Made up of troops of the 1st Separate Battalion, District of Columbia National Guard; 1st Separate Company, Connecticut National Guard; Company L, Massachusetts National Guard; 9th Separate Battalion, Ohio National Guard; 1st Separate Company, Maryland National Guard; and 250 draftees from Camp Custer, Michigan. Now its lineage is carried on by the 229th Main Support Battalion, Maryland National Guard, and the 372nd Military Police Battalion, District of Columbia National Guard.
After the Japanese capitulation in August 1945, the division secured the surrender of 41,000 Japanese troops and civilians on Morotai and the nearby Halmahera islands of the Dutch East Indies. Included were 37,000 troops, of whom 5,000 were in a naval force and 4,000 were civilians. The surrender was accepted on Morotai by Major General Johnson. Lt. General Ishii, the commander of the IJA 32nd Division and the senior surviving officer in the area, surrendered the Japanese Army forces to the 93rd after he was brought to Morotai on a U.S. Navy PT boat.
Two years after the war concluded, President Harry Truman integrated the U.S. Military, including the Fighting 93rd.