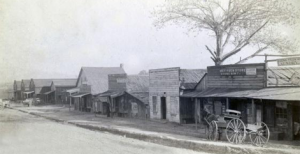 The photo above is believed to have been taken in the late 1880s or early 1890s.

San Bernardino was host in the latter decades of the 19th Century and the early part of the 20th Century to what became known as Chinatown, a section of Third Street between Arrowhead Avenue and Sierra Way. There was an influx of Chinese immigrants to San Bernardino, consisting of little more than a dozen people, in August of 1867. The 1870 U.S. Census recorded 16 Chinese males between the ages of 19 and 31 in San Bernardino. They were employed as laundry men, cooks, farmhands and houseboys.
In 1878, with the steady growth of the Chinese population and its willingness to work for low wages that presented a challenge to others struggling in the aftermath of the 1875 California Depression, the city’s Chinese population was prevailed upon to move and settle just past what was then the extreme east portion of downtown.
By the 1890s, San Bernardino’s Chinatown was home to close to 600 residents, and it included not only wooden shacks but more permanent brick and mortar structures in which were housed groceries, chop suey restaurants, and mercantile shops.
By 1926, San Bernardino’s Chinatown was broken up as the consequence of fires and economic forces, which saw the land taken over for commercial and other purposes.