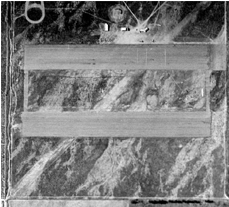 The earliest known photo of Fontana Airport is this 1948 overhead perspective.

Gilfillan Field, located southeast of the intersection of South Highland Avenue & Beech Avenue, was originally known as Fontana Airport. The airfield was a small airport which was commandeered by the Army Air Corps during World War II for training purposes and was subsequently used as an experimental station for aviation-, radar- and weapon-related equipment being developed by private industries with Department of Defense contracts.
Available records do not show when the airport was constructed. An early reference to the facility exists on a 1932 LA sectional chart, on which it is represented as an airfield. On the 1934 San Diego Sectional Chart it was labeled Fontana Airport. In 1937, an airports directory refers to it as Department of Commerce Intermediate Field at Fontana, and was described as having a triangular sand & gravel landing area, measuring 2,640 feet by 2,227 feet. It appears to have fallen into disuse and disrepair thereafter as a 1938 aerial photo of the area does not show a recognizable airfield and there is no reference to it on the 1939 LA Sectional Chart. By 1941, it is shown as an active airfield on that year’s LA Sectional Chart.
During WWII the field was used as a night training field for the Cal Aero cadets. By 1945, it was not depicted at all on the 1945 San Diego Sectional Chart, but by 1950, Fontana Airport was once again registered as an active airfield on the 1950 LA Sectional Chart. Anecdotal accounts, however, propound that the field minimally used to land planes but was rather popular with fast car enthusiasts as a dragstrip in the very early 1950s.
By late 1952, the Gilfillan Brothers, pioneers in the development of ground controlled approach radar, through an arrangement with the government, were using Fontana Airport to carry out radar testing flight operations. A three-story range antenna test tower was constructed at the southeast corner of the field, and thousands of test flights were conducted to support radar testing.
Gilfillan Electric was initially involved in the refinement and production of the MPN-1 Ground Controlled Approach (GCA) radar, initially developed by MIT during WW II, and Fontana Airport, which came to be known as Gilfallan Field, was used to test significant numbers of CPN-4, MPN-11 & Quad radar systems eventually produced by Gilfillan. This testing involved aircraft making a simulated landing approach under ground radar control to the point where the aircraft was on the brink of or actually did touch down so to verify or check accuracy, controllability and reaction of the GCA system. Owing to the relative shortness of the runway, however, landings of large craft could not take place. Thus, planes as large as the four-R-4360-engine C-124 GlobeMasters would swoop in, recover from the decent and in very short order return to full window-rattling flying speed to get airborne in order to lift high enough to clear nearby homes east of the field and then reclimb to altitude.
Little effort to refurbish the runway was made during this era and its condition deteriorated. To some degree, the landing strip remained active as a practice field for pilots of small craft practicing emergency and/or engine-out landings. By 1958, photos show the northern east/west runway marked with prominent Xs & “Closed” on each runway end.
Despite that, in the 1962 AOPA Airport Directory, Fontana Airport, with Gilfillan Brothers, Inc, shown as the operator, was listed as an active airfield with a 3,100 foot oiled runway and a 2,150 foot roadmix runway. Fontana Gilfillian is depicted as an active private airfield on the August 1964 LA Local Aeronautical Chart and the 1965 LA Local Area aeronautical chart.
In 1964, Gilillan Electric was sold off to become a division of ITT. During this era, the facility was being used for the .testing of missile electronics, which were flown in a Beechcraft.
The airfield was yet labeled “Fontana Gilfillan” Airport on the 1969 USGS topo map. By the early 1970s, the facility was no longer being used in the fashion or to the extent it had been previously. Fontana Airport is shown on the September 1971 USAF Tactical Pilotage Chart, but this is likely an anachronistic reference brought on because an older map was not updated. The last aeronautical chart depiction which has been located of Fontana Airport was on the August 1980 LA Terminal Aeronautical Chart.
It depicted Fontana Airport as a private airfield having 3 paved runways, with the longest being 3,100 feet.