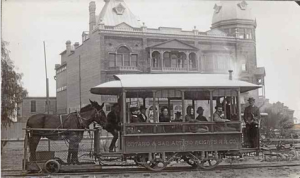 The Ontario-San Antonio Heights Line originally existed as a mule-pulled trolley that ran north and south within the Euclid Avenue median from State Street in Ontario to San Antonio Heights. A mule would pull the car the nearly five-mile distance up the incline, which represented an elevation gain of roughly 1,200 feet. On the return southward, the motive power would be placed aboard a connecting trailer and would coast down with the car. Two mules, Sanky and Moody, did the work on alternate days from the inception of the Ontario & San Antonio Heights Railway Company 1887 until the line was electrified in 1895. Thereafter, the mules were acquired by a rancher. A legend, possibly apocryphal is that the beloved beasts did fine uphill ploughing, but refused to work downhill. 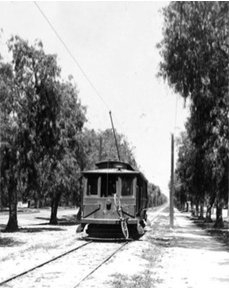