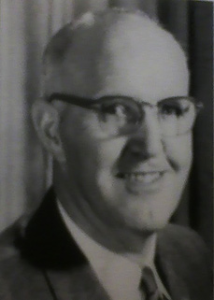 Donald Carl Beckord was born on September 15, 1905, in Waco, Nebraska. He was the son of Robert and Adolphine (Ziegenhagen) Beckord. Donald obtained his bachelor’s degree at Peru State Teachers College in Peru, Nebraska, and his master’s degree in political science from George Peabody University in Nashville, Tennessee. He then spent twelve years teaching American government in secondary schools in Madison, South Dakota.
Don Beckord and Gladys York were married on January 12, 1941 in Tampa, Florida. They had two daughters, Jane, the future Mrs. Mike Henry; and Mary, the future Mrs. Richard McEachen; and five grandchildren.
Beckord was a member of the United States Army Reserve Corps and was called to active duty during World War II in 1941. He served in the Information and Education Branch and received an honorable discharge as a major in 1945. From 1945 to 1951, Beckord was the chief of the Guide Service for the United States Bureau of Reclamation at Boulder Dam, Boulder City, Nevada.
The Beckords moved to Redlands in 1951 and engaged in citrus growing, through which he became and acquaintance and then associate of Wesley Break, who was San Bernardino County’s Third District Supervisor from 1944 to 1968. Beckord became active in civic and community affairs, serving as president of the San Bernardino County Board of Education, president of the Redlands Unified School District, president of the Redlands Union High School District and president of the Mission Elementary School District. He was awarded life membership in the Parent-Teacher Association and held membership in the American Legion, the Elks Club, the Rotary Club and the Redlands Masonic Lodge. He was also a member of the Farm Bureau.
Beckord’s other civic activities during his many years of community service included membership on the board of directors of the YMCA, chairman of the board of directors of the First Congregational Church and vice-president of the Plymouth Village Association. He served as president of the Salvation Army’s advisory board and as a member of the board of directors of the Community Chest. He also served as vice-president of the Redlands Chamber of Commerce and president of the Inter-Service Club Council. He served as a vice president of the East Valley Planning Agency and was a member of both the Corporate Redlands Community Hospital and the American Legion’s 25th District Veterans’ Hospital Committee.
All of this glad-handing rendered him well known throughout the community and in 1968, when Wesley Break chose not to run for reelection as Third District San Bernardino County supervisor, Beckord ran in his place and was elected. Beckord served from December 3, 1968 to December 2, 1972. During this period he was a member of the Environmental Quality Committee, for the Southern California Association of Governments, a member of the Revenue and Taxation committee for the County Supervisors Association of California, and he served on the Local Agency Formation Commission. Mr. Beckord died on September 30, 1983, at the age of 78, following a lengthy illness. He was survived by his wife of 42 years and by his two daughters and their families.