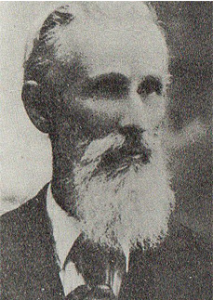 By Mark Gutglueck
Lewis Fillmore Cram was born on April 19, 1834 in Jay Township in Penship County, New York. He was the son of John Henry Cram IV, born in Jay Township in 1788 and Rebecca (Pease) Cram, the daughter of captain Isaac Pease, a navigator whose family had a fleet of whaling and trading ships. The family, which by then included nine children – Mariah, Sanborn, Chester, Lorenzo, Goodcell, William Henry, John, Van Rensslaer Pease and Lewis Filmore – moved to southeaster Michigan and then to Middlebury, Ohio. The family relocated to Bushville, Illinois, in 1843.
John Cram was a cooper by trade in both New York and Illinois, and after building a lathe from available materials, branched out to the manufacturing of wagon wheels and ladders.
When the news of the discovery of gold in California reached Illinois, John and Rebecca decided to head further west. The family minus Mariah, Sanborn and Chester, who were grown and living on their own, joined a wagon train bound for California, led by captain Daniel H. Rogers.
Contained in the Cram wagon was John Cram’s lathe.
The party consisted of the travelers, their wagons and 30 freighting wagons, necessitating that they avoid the routes utilizing the steepest roads and passes. This took them into Comanche territory, along the Cimarron Trail. Though they were followed by Indians, the Indians never attacked, though they did lose two mules to raiding parties.
The entire party made it intact to Santa Fe, after which the trail became far more forbidding, including ruts and other obstacles that made travel by wheeled wagons exceedingly difficult and risky. Some elected to remain in Santa Fe. The Crams, with five other families, set out for California, negotiating their way along a southern fork of the trail, along the periphery of the Rio Grande, over the mountains to the pueblo of Tucson and henceforward to Yuma by way of the Gila River. Apaches shadowed the wagon train.
While traversing what is today western New Mexico or eastern Arizona, Rebecca and Lewis came down with typhoid fever. Rebecca expired before the wagon train reached the settlement of Peoche, Arizona. Lewis recovered.
Following Rebecca’s death, the wagon train was raided by Indians as it was nearing Yuma. This created a stampede of both oxen and horses. Some of the stampeded beasts of burden were further driven off and stolen by the Indians. The families had to harness riding horses and cows to pull the wagons the rest of the way to get to Yuma. Despite this, John Cram did not part with the lathe.
In Yuma, the train split up, causing a further delay in the Cram family’s progression west. Some of their equipment and belongings had to be sold to obtain enough money for supplies and horses and mules to continue on to San Diego, where they arrived in 1852.
John Cram had lost his wife, but he had not lost his lathe. After moving from San Diego to Redlands in 1854, with two of his sons, Henry and Lewis, the four other sons having found work elsewhere, they set up their cooperage at the asistencia. An undershot waterwheel placed in the Zanja Creek provided power to their lathe. Thus was born the highly successful Cram Furniture Factory, which turned out over a thousand chairs and other articles of furniture which were sold throughout Southern California. In 1857, Lewis Cram purchased 160 acres of land in what is now East Highlands and planted deciduous fruits and grain and, in 1861, set out a few orange trees. Lewis Cram and Anson Van Leuven are recognized as having been the ones to introduce the first citrus plantings to this section of the country. Mr. Cram expanded his citrus plantings and set out his first of several orchards in 1869, becoming the first commercial grower in Southern California. Initially, the fruit was sent to market in lidded baskets which were succeeded by barrels and, finally, in uniform size boxes with graded fruit. He was awarded a prize at the Chicago World’s Fair in 1893 for getting the highest cash return in the country per acre of citrus fruit grown. Shortly after purchasing his initial tract of 160 acres, Lewis Cram filed for water rights on the Santa Ana River and channeled water from the mouth of the river to irrigate his fields and orchards.
Lewis Cram was elected to the position of San Bernardino County supervisor as one of three supervisors representing the Third District. Mr. Cram served from 1880 to 1883. In 1884, the three supervisorial districts were expanded to five with one supervisor from each district. Lewis Cram was elected again in 1892 for two years to fill the unexpired term of Fifth District Supervisor William H. Glass, who resigned in December 1891.
Lewis F. Cram and Sarah Ann Wakefield were married in Highland, on September 27, 1866. Sarah was the born on December 15. 1848, in Quincy, Adams County Illinois, the daughter of Andrew J. and Nancy Garner Wakefield. After a distinguished and productive life, Lewis Cram died on February 27, 1915, at his home in Highland. He was survived by his wife, Sarah, and seven children, Andrew J. William H, Mary E. Lewis F., John E., James E., and Robert E., and several grandchildren.
In 1983, Barbara Cram Riordan, a great-granddaughter of Lewis Cram, proudly followed in her great-grandfather’s footsteps by becoming San Bernardino County’s Third District Supervisor, serving with distinction from 1983 to 1996.