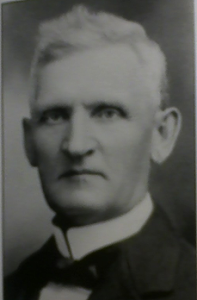 Alexander Perry Johnson was born on June 15, 1843 in Peoria County, Illinois. He was the son of Orson and Nancy (Mason) Johnson of New Hampshire. His ancestors can be traced to the early 1600s in North America.
He would come to be known as A.P. Johnson.
The ninth in a family of twelve children, he was provided with an elementary education at a small neighborhood schoolhouse. He then went to Altona, a village of about 800 people, where his long and prosperous business career began in the humble form of helping his brother O.T. Johnson, who operated a dry goods store. O.T. Johnson, in his later years, became one of the most prominent businessmen in Los Angeles.
For his first four months helping his brother, A. P. Johnson received a weekly salary of $1.50, with the privilege of sleeping on a counter in the store. Following this and a period of working for $200 per year, he attended advanced school for seven months. He gave up further academic pursuits in 1862 to return to his former position at the double stipend of $400 per year. In 1866, O.T. Johnson bought out the company which owned the small dry goods store together with a larger store in Galesberg, selling his brother, A.P. Johnson, a one-half interest in the Altona store. The following year, A.P. bought the other half interest, becoming the sole proprietor of the store and spent the following thirteen years in its development and successful operation.
A.P Johnson married Nancy Jeannette Cairns in 1875. She was born on May 15, 1853 in Altona, Illinois, the daughter of the Reverend George Cairns, a Presbyterian minister, who was born in Belfast, Ireland on March 8, 1818 and died June 25, 1863, and Elizabeth Ann Templeton, who was born at Sugar Creek, Pennsylvania, on February 10, 1832 and died in January 1932.
In March 1880, Mr. O.T. Johnson, at the time a tourist visiting Riverside, urgently advised his brother to come immediately to California. Mr. A. P. Johnson was so impressed with the area’s potential that he promptly bought a forty-acre fruit farm within eight days of his arrival. Both brothers sold their Illinois interests and made their homes in Riverside for the next twenty-six years, during which time A.P. Johnson became one of the most active men in the commercial and civic affairs of San Bernardino and San Diego counties. Less than three years after his arrival in the area he was elected to the San Bernardino County Board of Supervisors, representing the First District. He served on the board from January 8, 1883 to January 5, 1885, and would undoubtedly have served longer except that in 1884 he was elected to the 26th Session of the California State Senate, representing both San Bernardino and San Diego counties. The session was from January 5, 1885 until March 20, 1885, with additional meetings held in 1885 and in 1886. Subsequently, he served as chairman of the Rights-Of-Way Committee, where he was instrumental in securing the right-of-way for the Atchison Topeka and Santa Fe Railroad in Riverside. Following his term as the Republican state senator, A.P. Johnson was elected director of the California Fruit Growers’ Exchange, and was named its director. In 1890 he also built a citrus fruit packing house at Pachappa Station, near what is now Arlington Avenue and Route 91. He was a shareholder of the Glenwood Hotel in Riverside and the Riverside Sub-Irrigation Company.
In the 1890s, a group of agitators and malcontents, whose perfidy will ever be steeped in infamy in the annals of San Bernardino County history, undertook to secede from San Bernardino County, and succeeded in creating 7,303-square mile Riverside County, which was formed primarily from lower San Bernadino County and a slice of northern San Diego County. To his discredit, at least from the standpoint of San Bernardino County, Johnson essentially stood by idly while San Bernardino County was carved into by the disloyalists. Had Johnson and a few other key political players of that area simply hung tight, San Bernardino County, which yet stands as the largest county in the lower 48 states at 20,105 square miles, would remain at its once sprawling 26,000 square miles, and yet include such treasures as the City of Riverside, Palm Springs, Mt. San Jacinto, and another 60 miles of banks along the Colorado River. In 1906, the management of personally owned properties acquired in Los Angeles demanded more of his attention than he was able to devote while living in Riverside. With what must have caused him no small amount of sorrow, he left his beautiful orchards and showy mansard home on Magnolia Avenue and moved into the thriving city of Los Angeles. There he was commercially active up to the time of his death at age 94 on November 14, 1937. He was elected a director of the Union Oil Company in February 1914 and became the oldest member of that board of directors and the president of five corporations. Up until shortly before his death at his home in Los Angeles, Johnson managed the affairs of the O.T. Johnson Corporation, the A.P. Johnson Company’s farmlands, and the A.P. Johnson Company’s business, with an office in the Union League Building. He was active and alert to the end, with a stamina which would have done credit to men many years his junior.
A. P. Johnson was survived by his widow, Nancy J., two sons and three daughters: Orson T. Johnson of Newport, Mrs. Mary M. Dickey of Berkeley, Mrs. Candace E. Booth of Los Angeles, Mrs. Eva D. Fudger of Beverley Hills, and A.P. Johnson, Jr. of Downey; by five grandsons, three granddaughters, two great-grandsons and one great-granddaughter.