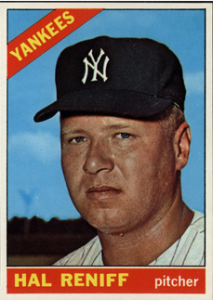 By Mark Gutglueck
Hal Reniff was a major league baseball pitcher from Ontario. He played professionally for 17 years, from 1956 until 1972. He spent seven years in the major leagues, and was a member of the final phase of the original New York Yankees Dynasty that endured from 1921 to 1964 before going dormant for 13 years. Reniff spent seven of those 17 years in the major leagues. His major league career, which lasted from 1961 to 1967, was sandwiched between his 1956 to 1962 and 1968 to 1972 stints in the minor leagues. During one of those years in the minors, 1959, he was arguably the best pitcher playing at that professional level.
Harold Eugene Reniff was born on July 2, 1938, in Warren, Ohio, the son of Harold G. Reniff, Sr. and Grace Eleanor Reniff. He was the great nephew of Joe “Moon” Harris, who played in the major leagues from 1914 to 1928. After playing baseball at Chaffey High School, from which he graduated at the age of 17 in 1956, he broke into organized baseball before eclipsing his 18th birthday with Kearney in the Nebraska State League. From 1957 to 1959 he played with Modesto in the California League, going to Salem in the Northwest League for a spell in 1958. In 1959, while playing for two different teams in two different leagues, Modesto in the California League and Greensboro in the Carolina League, he had a spectacular year, going 22-9 overall, that is 21-7 with Modesto and 1-2 with Greensboro, with 12 complete games out of 20 starts, 143 strikeouts, 94 walks and 2 shutouts in 186 innings pitched, with an ERA of 3.19. He played for Binghamton in the Eastern League and Amarillo in the Texas League in 1960, and Richmond in the International League in 1961.
A six foot tall 215 pound right-hander who was nicknamed “Porky,” Reniff was 22 years old when he made his big league debut on June 8, 1961, with the New York Yankees. In 1961 and 1962, he bounced back and forth between the Yankees, who were the World Series winners both of those years, and Richmond. He was in the bullpen during the Yankees’ World Series victory over the Cincinnati Reds, but did not pitch in any of the games. In 1963, when the Yankees would again make it to the World Series, he became a mainstay with the team, leading the Yankee pitching staff that year with 18 saves and chalking up a win-loss record of 4-3.. The following year, the Yankees would again go to the Fall Classic. That year, Reniff saved nine games and won six.
Overall, he had a spotless record in the World Series record, pitching 3.1 innings in relief in four games in 1963 and 1964 without yielding a single earned run.
The Yankees went into eclipse after losing the World Series to the St. Louis Cardinals in 1964. The team had been built around Mickey Mantle, who in 1952 inherited the role of star outfielder from Joe DiMaggio some 16 years after DiMaggio in 1936 had succeeded by two years Babe Ruth after Ruth left the Yankees in 1934. But by 1965, Mantle was growing ineffective because of his hobbling leg injuries and the Yankees lapsed into mediocrity.
On March 23, 1965, Reniff married Anne Noto.
Reniff had a sense of humor. According to sportswriter Vic Ziegel of the Daily News, on one occasion, after earlier games in the season had been rained out, the Yankees had to make up for one of those unplayed games on a previously scheduled off-day. There was little advance publicity for the game and the official attendance at the game was 413. As the game finished, Reniff asked the Yankees’ star pitcher, Jim Bouton if he brought his station wagon to the players’ parking lot. When Bouton said that he had, Reniff shot back, “Good, because the crowd needs a ride home.”
In the 1966 season, Reniff was the roommate of Yankees rookie pitcher Fritz Peterson.
In mid-season 1967, Reniff was 0-2 with the Yankees with no saves when he was traded to the Mets. With the Mets that year he recorded a record of 3-3 and had four saves.
He was sent down to the minors in 1968 with the Syracuse Chiefs of the International League and never made it back to the majors. He continued as a minor league pitcher from 1968 to 1972, and ended his baseball career at age 34.
Overall in the major leagues, he was 21-23 with 148 games finished, 45 saves, 314 strikeouts and 242 walks in 471.1 innings pitched, with an ERA of 3.27. Overall in the minors, he was 84-70 with 37 complete games out of 90 starts, 28 saves, 932 strikeouts, 687 walks and 5 shutouts in 1,205 innings pitched, with an ERA of 3.99. In 1959, he led the California League in wins with 21.
In addition to being the great nephew of Joe “Moon” Harris, Reniff was also related to several other professional baseball players: He was a great nephew of Dave Harris, a minor league pitcher in 1912; a great nephew of Jack Harris, another minor leaguer; a great nephew of Tom Harris, a minor leaguer in 1912; a great nephew of Ed Rodebaugh, a minor league pitcher from 1905-1909; and a cousin of Dick Clark, a minor league pitcher in 1948.
With his blond hair and blue eyes, after baseball, he was able to land a few acting jobs in Hollywood. He died at the age 66 in Ontario on September 7, 2004.