By Marian Nichols and Mark Gutglueck
Aurelia Squire Harwood was born in Janesville, Wisconsin in September 1865, the daughter of the wealthy Charles.E. Harwood and his wife, Catherine.
As a child in Springfield, Missouri, where she moved with her parents at an early age, she evinced an uncommon love of the outdoors.
She attended Drury University, where she obtained a liberal arts undergraduate degree. Later, she completed graduate studies at Wellesley College.
In 1886, Charles Harwood relocated to Southern California, where, in 1888, be purchased from the Chaffey Brothers 20 acres of the Ontario Colony. At that time, Ontario was considered to include the City of Ontario, as well as Upland, which was then referred to as Magnolia, and San Antonio Heights. Charles Harwood became a lemon rancher, and was the first president of the Upland Lemon Growers Association, which was started in 1893.
In 1887, with his brother Alfred, he entered into a venture with Hugh MacNeil, Charles Frankish, Daniel McFarand, Lyman Stewart, Oliver S. Pilcher and Godfrey Stamm called the Ontario Land and Improvement Company. Charles Harwood was allotted 1,000 of the company’s 4,625 shares. In this way Harwood had purchased a major portion of the North Ontario land that would later become Upland. Charles and Alfred acquired at a sheriff’s sale what was referred to as the Bedford real estate. For a cost of $63,504, the brothers acquired all of the Bedford property, including the beautiful Magnolia Villa, held in lien. The Harwood brothers planted the eastern 100 acres of this property with orange trees and relandscaped the Magnolia Villa property. 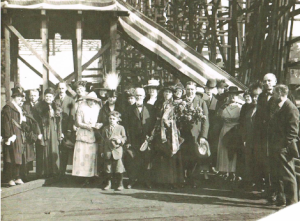 Pictured in this 1918 photo is the Christening of the SS Paul Harwood, a tanker constructed by the Bethlehem Shipbuilding Company of San Francisco. The ship’s namesake was a member of both the Paul and Harwood families. Frances Paul was the founder of Upland’s San Antonio Community Hospital. She is seen toward the left between the two gentlemen behind her and is wearing rimless glasses and furs. Charles Harwood, perhaps the most successful businessman in Upland, is in the center with the white hair and white beard. Aurelia Harwood, holding a bouquet, is next to her father.

Charles Harwood, along with Charles Frankish, established the Ontario & San Antonio Heights Railway Company. The railroad went into operation in September 1888.
Charles Harwood built what is now referred to as the Old Harwood House, the stately Victorian home on the northwest corner of Euclid and 15th Street. Harwood lived there with Aurelia and a Chinese cook. With the advent of the horseless carriage, Charles Harwood was one of the few car owners in town to employ a chauffeur.
In 1906, upon the founding of the City of Upland, Charles Harwood was elected as one of the members of the maiden city council.
Aurelia was an educator. She was also a conservationist. So passionate was she about conservation that she became the first female president of the Sierra Club in 1927, and retained that position in 1928. In addition to her terms as president, she simultaneously sat on the Angeles Chapter’s executive committee, and the club’s board of directors, from 1921 to 1928.
She was instrumental in establishing the Tahquitz Game Preserve in the San Jacinto Mountains in 1927.
Over the years, she became a member of the Green Mountain Club, the Mazamas, and the Mountaineers. She joined the Sierra Club, and led local outings for fourteen years.
Following her father’s example, Aurelia donated to help fund universities, contributing to Pomona College, and scholarships for Chinese students at Mills College.
When the Chinese cook who had served her and her father so faithfully grew ill and was in the first San Antonio Hospital located near the corner of San Antonio Avenue and Arrow Highway, Miss Harwood visited him daily.
Aurelia Harwood died in 1928, predeceasing her father by five years. She had never married. She was buried at Bellevue Cemetery in Ontario, California. The Angeles Chapter of the Sierra Club named their new lodge after her in 1930. The peak east of Mount San Antonio, Mount Harwood, was also named in her honor, and recognized by the USGS in 1965. It stands at a majestic 9,552 feet and boasts a 152 foot prominence. Harwood Court at Pomona College, and her namesake scholarship at Mills College, still bear her family name.