By Mark Gutglueck
The Women Airforce Service Pilots (WASPs), also known as the Women’s Flying Training Detachment (WFTD) and the Women’s Auxiliary Ferrying Squadron(WAFS)
were the pioneering organizations of civilian female pilots first organized in September 1942 and, employed to fly military aircraft under the direction of the United States Army Air Forces during World War II. The WFTD and WAFS were merged on August 5, 1943, to create the paramilitary WASP organization.
Their contribution to the war effort consisted of ferrying military aircraft both from the factories where they were produced to military bases and in some cases from military bases to other military bases, thus freeing up Army Air Corps pilots for combat duty. WASPs did not receive combat training and did not fly in combat roles. Records do not reflect that they ever served overseas, though one WASP who lived in Southern California in the 1980s claimed she had ferried planes to Greenland. Between September 1942 and December 1944, the WASPs delivered 12,650 aircraft of 78 different types.
Some 25,000 women applied to join the WASP, but only 1,830 were accepted and took the oath. Only 1,074 of them passed the training and joined, receiving commercial pilot certification in the process. They were trained to fly using Army Air corps standards by the U.S. Army Air Forces in a four-month military flight training course at Avenger Field in Sweetwater, Texas.
Thirty-eight WASPs died in service to their country.
One of those was Marie Michell. 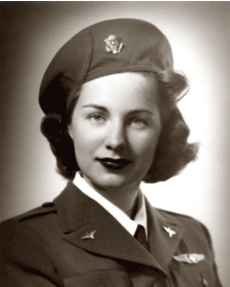 Born on May 23, 1924, in Detroit, Michigan, Marie Michell joined the WASP in late 1943 when she was 19. She already had her private pilots license when she reported to Avenger Field. She graduated on March 13, 1944 in Class 44-W-2. .
She was initially assigned to the Fifth Ferrying Group at Love Field in Dallas, Texas. The Fifth Ferrying Group was part of the Air Transport Command. While with the Fifth, Michell flew all order of military planes from their factories to various bases around the Continental United States.
She was later transferred to Victorville Army Air Field , later renamed George Air Force Base in what is today Victorville.
Regulations prohibited WASPs from being married. Nevertheless, secretly in August or September 1944, Marie Michel married a U.S. Army Air Corps flight surgeon, Major Hampton C. Robinson.
On October 2, 1944, Michell Robinson reported to replace another WASP pilot on what was in official log books described as a “day transition” training mission. In the B-25D Mitchell bomber with her were First Lieutenant George Danilo Rosado from San Diego, a twenty-seven –year Army Air Corps pilot with two sons, and Staff Sergeant Gordon L. Walker, also married with a two-year-old son. Rosado was the pilot; Michell was the copilot; Walker was acting as the crew chief, whose task would be to lower the landing gear in the case of a hydraulic failure.
The plane took to the air in clear weather from Victorville Army Air Force Station at 1:15 p.m. local time with Rosado, who had 1,521.5 flight hours to his credit, at the controls.
Two other aircraft, Bell-P-39 were in the air during that approximate time. One of the P-39 pilots, Second Lieutenant Lawrence A. Beishel, reported that he saw the B-25D stall and then enter a spin from which there was insufficient altitude to recover. The centrifugal force from the spin would have prevented any of the crew from ejecting. Lieutenant Beishel reported he could see no parachutes emerge from the plane, which crashed into the desert floor roughly 25 miles west of Victorville Army Air Force Station at 1:30 p.m.., and burst into flames.
The army board looking into the crash made a finding that the pilot, assumed at that point to have been Rosado, had permitted the B-25D, serial number #41-30114 to stall and enter a spin from which there was insufficient altitude to recover. Who was actually flying the craft at the time of the fatal plunge could not be conclusively determined. The North American Aviation Corporation flight manual for the B-25 gravely warns pilots that the aircraft should not be intentionally entered into a spin under any circumstance.
Unlike Army Air Corps pilots, WASPs were considered civil service employees and did not receive military benefits. Because they were not considered military under the existing guidelines, a fallen WASP was sent home at family expense without traditional military honors or note of heroism. The army would not allow the U.S. flag to be placed on the coffin of the fallen WASP. Major Robinson was granted leave to accompany his wife’s body home to Flint, Michigan, where her remains were interred.